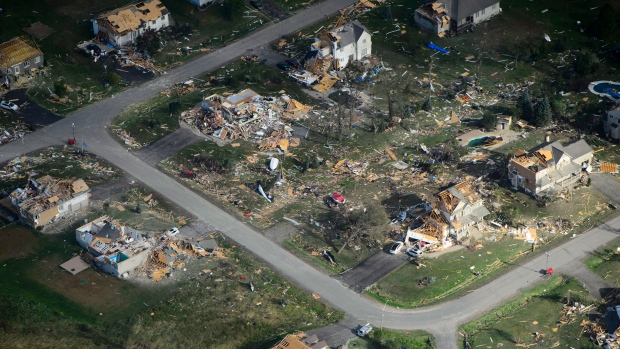 Tornado Damage in Ottawa on the Mend

Friday past, Ottawa suffered direct hits with three tornadoes.  One at F1, one at F2, and the most serious an F3.   The F1 struck Calabogie, just to the west of Ottawa, then bounced up restriking as an F2 in the Kinburn area of west Ottawa cutting a swath of destruction through to the Dunrobin area, then crossing the river into Quebec wreaking havoc on the Quebec side.  There was considerable damage along this western corridor with many buildings damaged, and roughly 30 homes that were totally destroyed in the Kinburn/Dunrobin Area.

Then ten minutes later an F3 formed near the Hunt Club exit at the 416.  This tornado tore into two highly populated areas sections of Ottawa, Arlington Woods and Craig Henry.  These two areas are decimated.   The tornado continued eastward following Ottawa’s high tension power source from the provincial grid, striking the first of two main distribution stations decimating the west end station and crippling the east end main distribution station.  At this point the entire city was without power but quickly over the next few hours the east end power was sort of resumed.   The work continued over the weekend restoring power and by Monday evening power had been restored to all but about 4,000 homes and businesses in a fairly small area.  By Tuesday night all power has been restored with the exception of 109 homes near the Hunt Club corridor in the West end.  These 109 homes may be months until they have their power restored but only after being completely rebuilt or replaced.

Thanks to all those overworked hydro workers, Traffic lights are back to normal.  Businesses are again all open.  Until the next catastrophic weather event, Ottawa is open for businesses, well maybe not the building housing Sesame Street where the children seem to be in control.