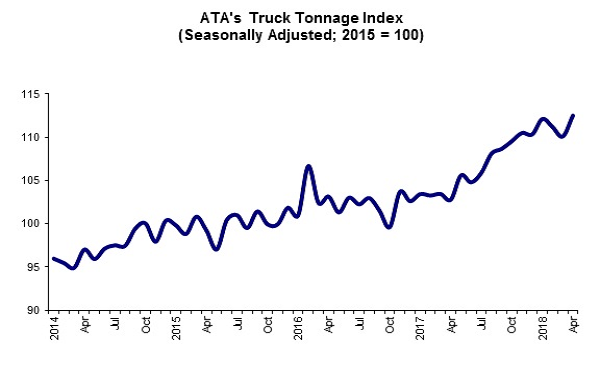 American Trucking Associations’ advanced seasonally adjusted For-Hire Truck Tonnage Index increased 2.2% in April after easing 1% in March. In April, the index equaled 112.5, up from 110.1 in March.

Compared with April 2017, the SA index surged 9.5%, which was the largest year-over-year increase since October 2017. Year-to-date, compared with the same four months last year, tonnage increased 8%, far outpacing the annual gain of 3.8% in 2017.

The not seasonally adjusted index, which represents the change in tonnage actually hauled by the fleets before any seasonal adjustment, equaled 109.2 in April, which was 4.8% below the previous month of 114.7.

“Truck freight tonnage remains robust,” said ATA Chief Economist Bob Costello. “And I don’t think we’ve even seen the traditional spring freight season yet. People are just getting around to buying grills, lawn mowers, and yard tools. Plus, the produce season was also delayed due to a cold snap in early spring. Longer-term, strength in consumption, factory output, and construction should keep truck freight tonnage solid for the quarters ahead.”

ATA calculates the tonnage index based on surveys from its membership and has been doing so since the 1970s. This is a preliminary figure and subject to change in the final report issued around the 10th day of the month.