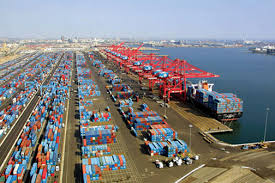 A lawsuit was filed Monday alleging that Southern California units of port trucking firm XPO Logistics Inc. improperly classified drivers as independent contractors rather than employees, depriving them of wages and benefits.

The suit seeks class-action status on behalf of about 160 or more drivers that operate at the twin ports of Los Angeles and Long Beach.

Government officials and regulators also have become involved. In January, Los Angeles City Attorney, Mike Feuer sued three other port trucking companies, also alleging that the misclassification enabled the companies to avoid providing drivers with a legal minimum wage and employee benefits.
In the suit against XPO Logistics, three drivers alleged that the company maintained a “deliberate scheme to misclassify their truck drivers as independent contractors, thereby denying them the fundamental protections due to employees under California law.”

The suit alleges that in certain cases XPO Logistics failed to pay the minimum wage, failed to pay wages for missed meal and rest periods, and failed to reimburse business expenses as required, among other things.

Plaintiffs’ attorney Julie Gutman Dickinson told reporters that XPO Logistics had faced litigation and regulatory action in the past but “continues to misclassify workers and flout California labor laws, leading to the class-action lawsuit that we filed today.”

XPO Logistics said it had not yet received a copy of the suit but that “we know the vast majority of drivers want to maintain their independence as contractors. We’ll continue to defend this business model.”

XPO, based in Greenwich, Conn., is a multinational logistics company that operates 1,455 locations in 32 countries and had $15.4 billion in revenue last year.

Since 2011, the California labor commissioner’s office has awarded port truck drivers more than $46 million in cases in which they contended they were misclassified as contractors.