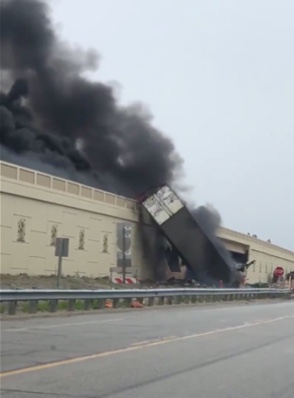 Trucker’s Heroic Actions Saved Lives, But Not His Own

Law enforcement is calling a trucker a hero after he swerved off the road rather than colliding with four other vehicles that had crashed on Interstate 94 in Caledonia, Wisconsin.

The crash occurred around 11 a.m on June 19th when the driver of a southbound tractor-trailer, attempted to change lanes but then hit a construction barrier. This caused a median wall to fall into the northbound lanes. Three passenger vehicles collided with the median wall, the trailer, the barriers, and each other.

If the trucker didn’t swerve off the road, the police estimate the crash would have endangered the lives of those in four additional passenger vehicles. The trucker fell about 30 feet down the frontage of the road and avoided contact with the disabled vehicles.

“I think this unfortunate deceased individual is a hero by turning down and risking his own life to avoid crashing into innocent people,” Schmaling said.

The police are still waiting to identify the deceased trucker pending notification of next of kin.