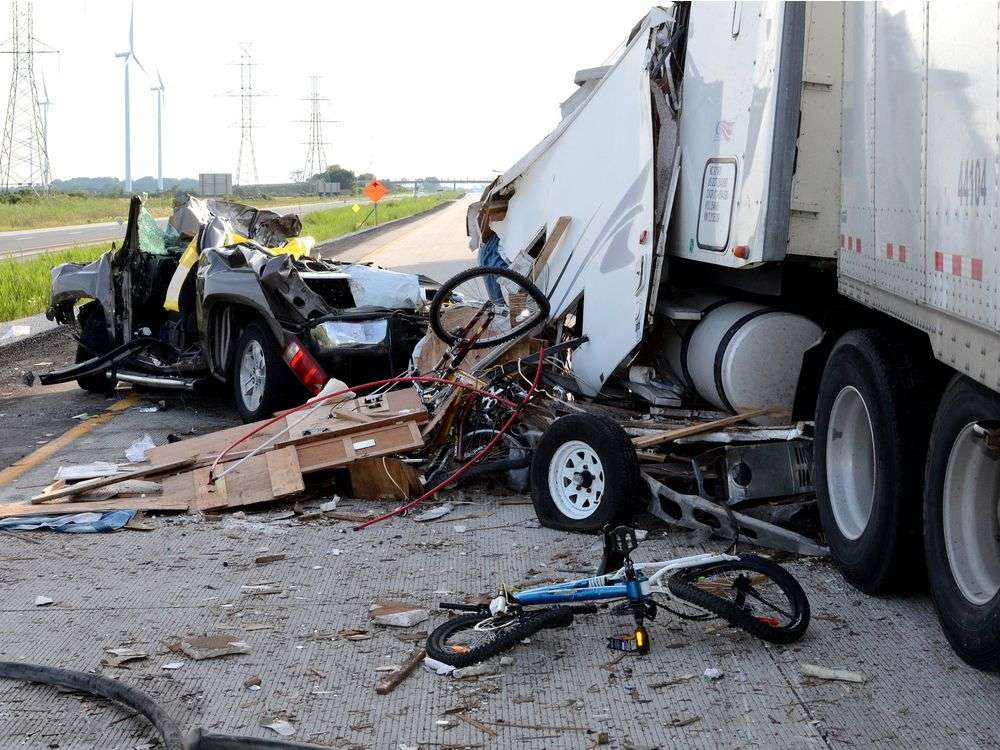 A  trucker received an 18-month jail sentence Monday for his role in a crash that claimed two lives on Highway 401 last year following a joint submission from the Crown and defence.

Manjit Parmar, 52, plead guilty this summer to five counts of dangerous driving, including dangerous driving causing death, for the July 30, 2017 crash that killed Lacie Brundritt, 42, of Amherstburg and her son Kyle, 14.

Parmar also was given a 30-month driving ban in a Chatham courtroom.

Victim impact statements had been read in court in September.

Michael Brundritt, the victim’s husband, suffered a broken back. Kyle’s younger brother Evan, 12 at the time, suffered head lacerations, as did a Michigan motorist.

“I’m looking forward to hopefully having some closure now that we’ve gone through the court case,” Brundritt told reporters outside court Monday.

“But there’s difficulties in that closure, because I’m leaving behind two loved ones who were a big part of our family.”

Brundritt was returning home with his family from a summer camping trip while towing a five-metre recreational vehicle. They were stopped at the end of a westbound line of traffic in a construction zone in Chatham.

The tractor Parmar was driving went through the RV and landed atop of the Brundritt’s pickup truck, killing the mother and son seated on the passenger side, the court had heard.

Parmar’s rig smashed into three other vehicles before slamming into the trailer of another tractor-trailer and coming to a stop.

A Brampton resident, Canadian citizen and father of three boys, Parmar was described last month as having an otherwise spotless driving record during 17 years as a truck driver with more than 1.6 million kilometres on the highway.

Married 27 years, he had no criminal record and no alcohol in his system on the day of the crash. In September, Parmar told court, “I am sorry for the family for the loss.”

Brundritt, who offered forgiveness to Parmar, hopes he and everyone involved will find closure as well.

“Not only did this tragedy affect my family, but it affected a lot of friends and family,” he said.

He admitted the 18-month sentence was difficult to accept, but noted the guidelines were followed.

He said he remains hopeful that drivers will still get the message and stay safe on the road.

“I don’t think there is any specific number. This is something that I’m going to have to live with for the rest of my life,” Brundritt said.