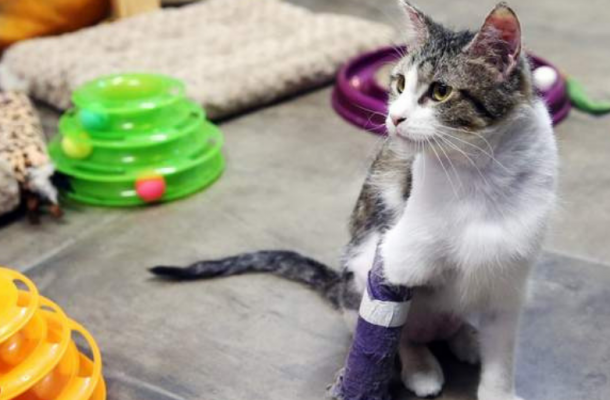 Truck driver, Jake Heiar, was driving along the 151 highway in Iowa toward Cedar Rapids, when he stopped to rescue a cat that had just been run over.

“I saw him flailing around,” the 38-year-old truck driver from Hiawatha recalled. “I just figured any good person would turn around. It was just instinct.”

Jake scooped the cat up, wrapped him in his jacket and drove him to a non-profit that provides life-saving medical care for stray and homeless animals called Critter Crusaders.

Jan Erceg, the medical coordinator of Critter Crusaders, said the cat had three broken legs, hip fractures, and a collapsed lung—but more importantly, he had fight in him.

“He [the cat] allowed everyone to work with him and handle him, even though he was in quite a bit of pain,” Erceg said.

Erceg said. “Hero is so overused, but this was a very heroic act,” as he described Jake Heiar.

After the surgery, the cat got named Jake after the hero who saved his life.

Jake the cat now enjoys spending his time watching TV and running around even with a cast on one foot at a Saving Animals In Need Today foster care location.

On June 7th Jake Heiar was presented with a lifesaving award from Critter Crusaders and was reunited with the cat.

“It was a good feeling to see him again and see how good he is doing,” Heiar said. “I just hope somebody else would have done the same thing.”