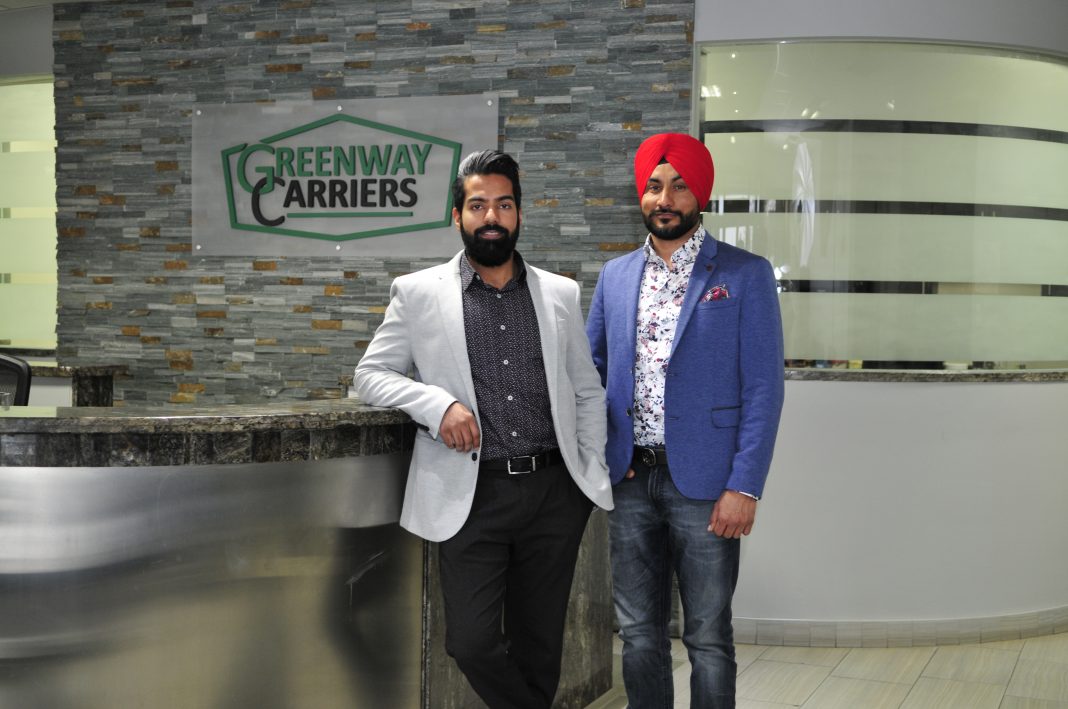 Harpreet Mander was neither oblivious nor afraid of change when he landed on Canadian soil in the year 1998. After giving himself some time to settle down to his new life in North America, he chalked out a plan for himself to write yet another phenomenal Canadian immigrant story.

Navigating his way to success, Harpreet became an owner operator after driving a truck for ten years. By then, he had gained a strong sense about the trucking industry in North America. For him, the time was right to become the owner of a trucking business. Consequent to hearing Sukh Kang speak in financial forums, he was impressed by Sukh’s vision, planning and strategic thinking. The fact that Sukh had the knowledge of back office operations of a Trucking company was like icing on the cake! Sukh mentioned that trucking business is close to both of their hearts, as Harpreet had been in the frontline of a trucking business and Sukh’s father was already part of the business.

In 2009, Greenway Carriers was formed, owned by perhaps the youngest team of two, in the industry. Both Harpreet and Sukh knew they had the power to influence in getting the other person to participate. Their personalities and experiences complimented each other. The Greenway team had the knowledge, but had to establish their ability to make a mark in the industry. Raising capital was an important issue, but they both worked hard and stuck to the principle of lean and mean. Sukh handled the back office and Harpreet focused on the trucks on the roads. According to Sukh, there is no book on trucking where all the scenarios are written about. From their first Freightliner truck and the first load from Concord to Quebec City, Harpreet and Sukh began building their fleet of truckers one at a time. With strong fundamentals like getting the business first and adding a truck afterwards, Greenway Carriers was put in a strong position even though it was a time when Canada was in midst of a severe recession. Both concurred that it was a very tough time for them but it also prepared them for the downturns, which, needless to say, one always encounters in any industry.

Harpreet and Sukh faced another challenge during the negotiations of the new United States-Mexico-Canada agreement (USMCA). They came out of their comfort zone and focussed on their strengths. They went through the process of reprioritization and worked on creating opportunities and increasing their networking. Their company was heavily into transportation of paper, which is part of a long list of items that the USA has now put tariffs on. However, demand increased from Greenways’ clients as they were doing business with companies that weren’t affected by these tariffs. As the loads increased for Greenway Carriers, Harpreet and Sukh reached out to other paper companies as well. By the time the tariffs were removed, Greenway had secured more business from the paper industry and navigated its way to success.

The USMCA has not affected the trucking industry itself but due to tariffs on steels and metals, the trucking businesses have slowed down.

Harpreet and Sukh completely realize that being a leader requires unquenchable passion for growth and unquestionable commitment. Even after remarkable success under their sleeves and a fleet of over 100 trucks, 300 trailers and an employee base of 150, both Harpreet and Sukh remain modest in their lifestyle. They both mentor young students, new staff members as well as engage with their employees daily. They run their business professionally where they motivate their employees with incentives unparalleled in the industry. They keep their fleet technologically updated. Drivers and all other employees have their company’s full support and the trucks have new environmentally friendly technology that saves on diesel. The only concern they have is paucity of drivers in Ontario due to the existing immigrant laws.

Harpreet and Sukh’s responsibility does not end with their employees but they also give aid to the people in need. Harpreet keeps in touch with his village Kaulgarh in District Fatehgarh Sahib and recently distributed books and clothes to needy children there. Harpreet is married to Sandeep Kaur Mander and is blessed with two children, Kabir Singh Mander and Mahtab Singh Mander.

They both believe that now that their business is steadily running, they would like to travel all around the world. They both like going to the gymnasium and Sukh is big on reading self-motivational books. On being asked what they would like to say to the vast readership of this publication: they said, “Readers: make a decision and run with it…”