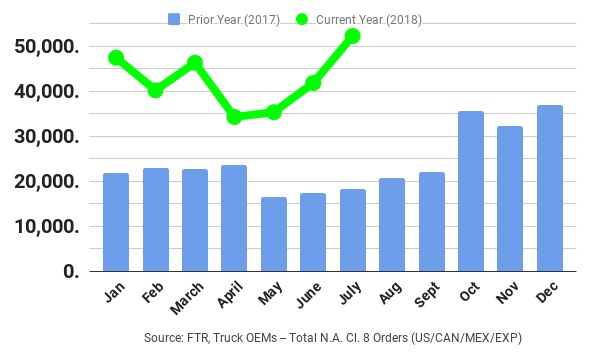 Class 8 orders were tremendous for the U.S. market, with most OEM’s achieving elevated levels. Orders were up 25% month-over-month and 187% year-over-year. Orders have been astounding in 2018 said FTR, citing five of the highest 12 order months ever have occurred in the first seven months of this year.

North American Class 8 orders for the past twelve months have now totalled 445,000 units.

Fleets are desperate to get new trucks, but supply is limited.

Because fleets are frustrated by the current situation and are uncertain when they can receive trucks, they are placing a large volume of orders in hopes of getting some deliveries at some point in the future. In essence, there is a truck shortage. Freight growth is robust and industry capacity is extremely tight. OEM’s have been hindered because numerous parts and component suppliers have not been able to produce and deliver on time.

Don Ake, FTR vice-president of commercial vehicles, said:  “The supply chain issues began around March. OEM’s started falling behind in deliveries to fleets in April. Deliveries did improve a bit in June, but most OEM’s are still operating in catch-up mode. It is uncertain when suppliers will be able to improve delivery times and for OEMs’ to ship all orders on time. Realistically it may take up to a year for everyone to catch up.

“This is a unique situation where strong demand is meeting limited supply. Prices can’t rise enough to alleviate the situation. Therefore, the market is responding by placing an immense number of orders into the backlog. Fleets are reserving places in line, so they can get the maximum number of trucks in the future. It is a bizarre occurrence and it will not be resolved soon. Conditions may be abnormal, but they are abnormally good.”