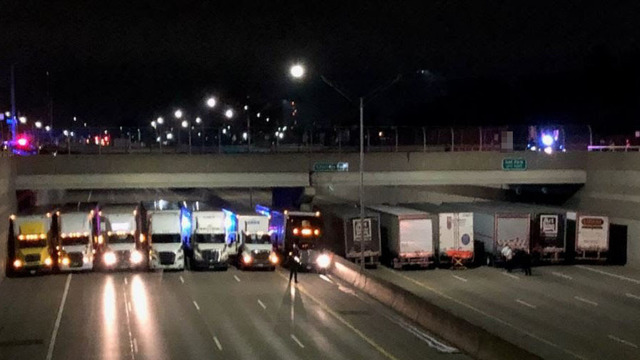 Truckers Work With Police To Help Prevent A Suicide

More than a dozen tractor-trailers lined up beneath a Detroit-area freeway overpass to aid police in preventing a man from committing suicide.

Troopers received a call early Tuesday about the man standing on an overpass above Interstate 696. Officers jumped into action, routing traffic away and directing truckers to drive into positions under the overpass to shorten the fall if the man jumped.

Thirteen trucks lined the freeway as police tried to help the man. The incident lasted about three hours, from 1 a.m. to 4 a.m, until he walked off to seek medical help.

Shaw says troopers typically work with truckers during such incidents, but it’s unusual to have so many involved. Sgt. Jason Brockdorff agreed, saying “That’s a practice we use if we have a jumper. We try to do it every time, to lessen the distance someone would travel if they were to jump. Fortunately, that didn’t happen.”

Michigan State Police tweeted out a photo of the happenings, saying “This photo does show the work troopers and local officers do to serve the public. But also in that photo is a man struggling with the decision to take his own life. Please remember help is available through the National Suicide Prevention Lifeline at 1-800-273-8255.”