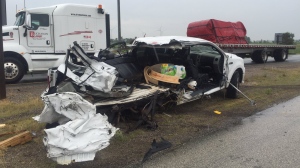 Trucker causes crash after backing up for missed exit on Highway 401: OPP

Essex County OPP say a Brampton trucker is facing charges after he caused a crash while backing up for a missed exit on Highway 401.

The westbound lanes of Highway 401 near County Road 25 (Puce Road) in Lakeshore have reopened following a crash that sent two to hospital late Friday morning.

At around 11:30 a.m., the driver of a tractor trailer allegedly stopped his vehicle in a live lane of traffic on the highway just west of County Road 25.

Police say the driver began to reverse his truck after missing the Puce Road exit.

A westbound pickup truck hauling an enclosed utility trailer could not avoid the collision striking the tractor trailer, say police.

Essex-Windsor EMS transported both occupants of the pickup truck to an area hospital, the driver with minor injuries and the passenger receiving serious but non-life threatening injuries.

The driver of the tractor trailer, a 49-year-old Brampton was not injured and will be charged with dangerous operation of a motor vehicle causing bodily harm.

Highway 401 westbound was closed for over four hours during the investigation.

The first rule of safe defensive driving on controlled access highways is, if you miss your exit, go to the next one and come back.   Being safe is more important than the lost twenty minutes.