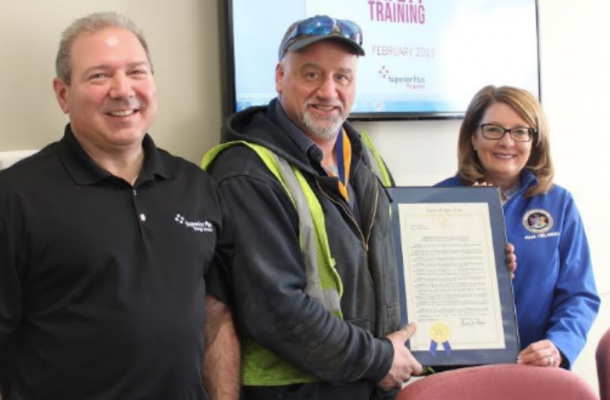 Patrick Rutherford, a Newark propane truck driver with Superior Plus Propane, received the Senate State Liberty Medal from State Senator, Pam Helming, for displaying exceptional and heroic acts on the behalf of his community.

In November of 2017, Patrick heard a crash behind his truck while he was filling his tanks and ran to the vehicle immediately, pulling the female driver out of the car before it exploded, saving the woman’s life.

State Sen., Pam Helming, said, “Mr. Rutherford maintained his composure, and demonstrated his true character and genuine compassion for the well-being of others through his brave actions. He is truly a hero who shows great courage and diligence, not just in this moment but throughout his life.

Mr. Rutherford is the kind of hero who goes quietly about his business every day in our community, giving plenty to those around him but never expecting anything in return.”