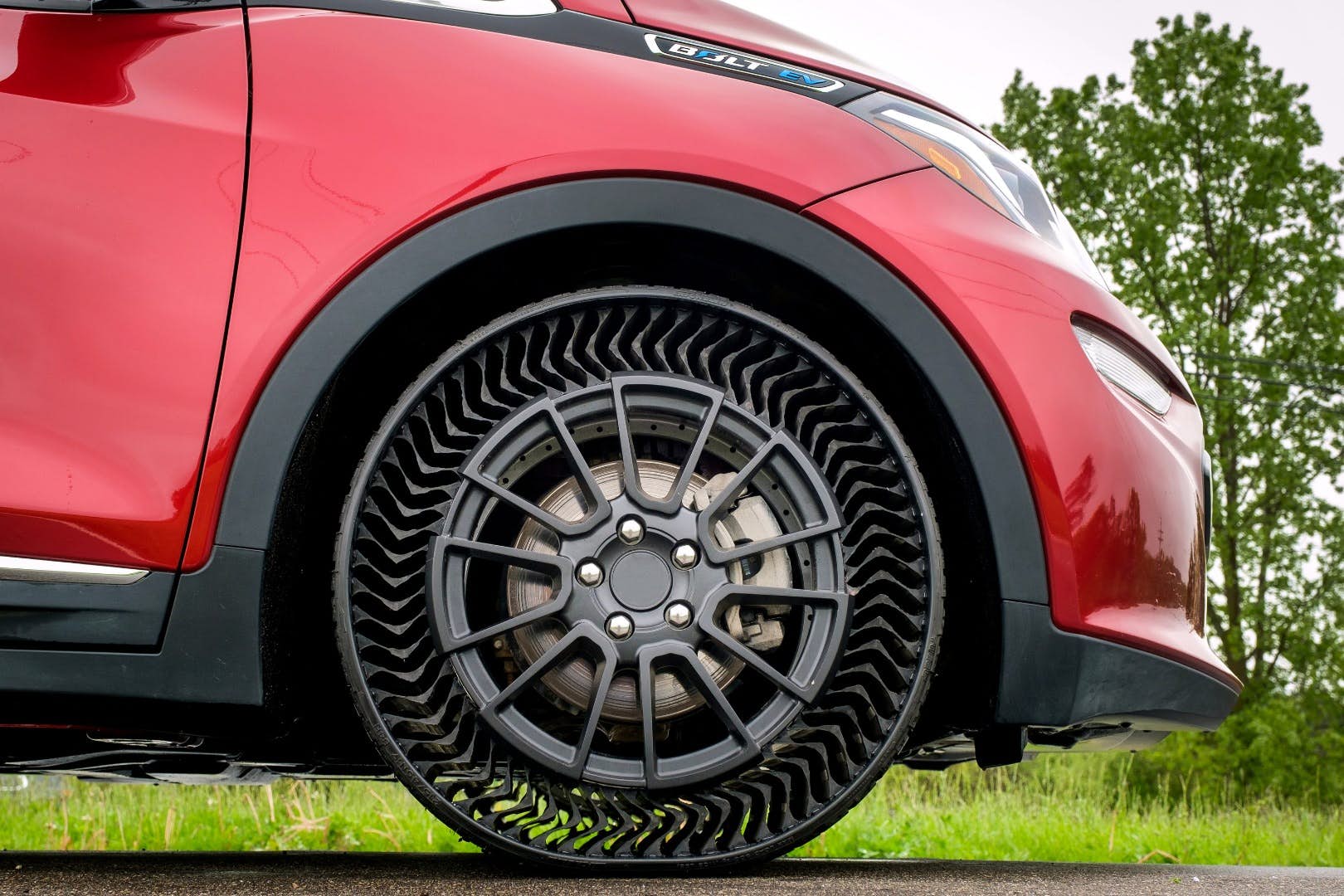 Michelin has teamed with General Motors to target a 2024 production goal for airless tires. The tires, called Uptis, will have several benefits over radial tubeless tires and will debut for testing on the Chevrolet Bolt electric car.

Michelin says that the Unique Puncture-proof Tire System (“Uptis”) prototype represents a major step toward realizing its Vision concept, first unveiled at the Movin’On Summit for sustainable mobility in 2017. The end goal is to replace both tire and wheel with a full assembly unit for passenger vehicle use. GM plans to begin real-world testing of the Uptis prototypes later this year on a Michigan-based fleet of Bolt EVs.

Airless tire technology has several benefits both for the vehicle driver and for the planet. The tires use less raw material and less energy in their production, reduce the number of scrapped tires from puncture or damage, eliminate most irregular wear issues from over or under inflation, and reduce dangers on the road from blowouts and sudden flats.

According to Michelin, currently, about 12 percent of tires on the road will be scrapped early due to blowouts and about 8 percent will be scrapped due to irregular wear because of inflation issues. That forms much of the total of 200 million tires scrapped annually for early replacement.

The Uptis is a production-ready version of the Tweel system which Michelin unveiled in 2005. Michelin announced a new US$50 million plant in 2014 for producing airless tires. The Tweel is being produced for non-passenger vehicle use, specifically in construction, farm, and other equipment.

For the car driver, Michelin claims the Uptis tire won’t feel much different from a standard pneumatic tire. The weight of the Uptis is in between the weight of a standard tire and a run-flat at 22.5 kg (49.6 lb). The Uptis has the advantage of removing the need for a spare tire, however, which can be a significant weight savings for a vehicle.

Michelin has not announced pricing structures for the Uptis tire system and has not indicated what range of vehicles or vehicle sizes in which the Uptis will be available. The company talks about targeting fleets and shared or rented vehicles, so the tires are not likely to be available at average consumer-level costs at the start.

Previous articleTexas Legislature OKs deal to improve wait times at ports
Next articleContractor or Employee, California Opens The Can of Worms