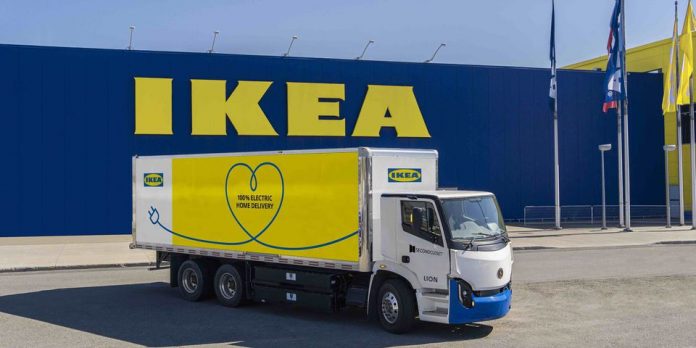 One of the largest home furnishing stores in the world has decided to have some of its deliveries in Canada be done by electric trucks, showing again that electrification is establishing strong roots in the transportation industry.

Swedish giant IKEA has purchased 16 heavy-duty electric trucks from Quebec-based Lion Electric and will begin with deliveries in Quebec and Ontario later this year. IKEA was named amongst Canada’s greenest employers for more than a decade and remains committed to its leadership in sustainability.

For IKEA, this is a partnership with Canadian owned logistics company, Second Closet, a Toronto-based start-up company that was founded in 2017. ”We are pleased to be working closely with IKEA Canada and Lion and look forward to seeing these trucks on the road making deliveries,” said Mark Ang, CEO and co-founder of Second Closet.

Similar words were said by IKEA: “We are pleased to work with Second Closet and Lion Electric, two great Canadian innovators, to support us in meeting our customers with people and planet in mind,” said Michael Ward, CEO and Chief Sustainability Officer at IKEA Canada.

Since the pandemic began over a year ago, IKEA has seen a 30% increase in home deliveries compared to 2019.

The 5-tonne trucks will be a step in the right direction in the challenges of pollution, congestion, and noise levels in cities. IKEA says that it hopes to achieve 100% zero-emission deliveries by 2025.

“Electrifying our last mile delivery service is an important step in our journey to become climate positive by 2030, especially with the rapid acceleration of our online business over the past year,” said Ward.

In order to make sure infrastructure is there, IKEA has electric vehicle chargers at all of its 14 stores across Canada.

MELT Program Now in BC