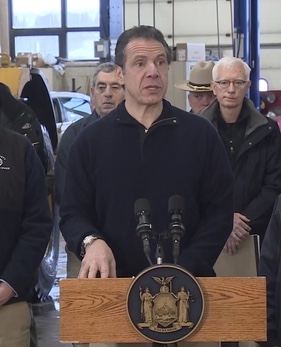 State police will increase penalties for truck drivers who violate Thruway bans after a massive wreck on the highway on Wednesday, the governor said.

Governor Andrew Cuomo says a tractor trailer, that was on the Thruway despite the ban, was responsible for the 21-vehicle pile-up on Wednesday.

Trucks and commercial buses were banned from the highway west of Rochester starting Tuesday night — but the governor says the driver remained on the highway Wednesday afternoon and jackknifed near Batavia. The pile-up crash closed that section of the Thruway for hours. Thankfully, no one was killed.

Drivers who violated the ban faced only a $450 fine and points on their license. But, the governor said he is now looking for troopers to press criminal charges against drivers.

“It won’t just be a traffic citation,” the governor explained. “it could be a crime. Under the penal law, there can be a crime under Section 120 for reckless endangerment and assault. So we are not kidding around about the tractor trailer ban. We put it in place. We have the data to show that when tractor trailers violate the ban, bad things happen.”

“What we’re talking about increasing penalties to be criminal penalties. That has a dramatic effect on a tractor trailer driver,” said Cuomo.

He explains, “A criminal infraction could cause them to lose their commercial driver’s license (CDL). So we are 100 percent serious.”

The governor also re-emphasized the risk created by drivers who violate the ban.

He adds, “You’re not just endangering yourself, you’re endangering other people. And you’re endangering first responders and emergency personnel. And as governor of the state, I’m going to do everything I can to make sure our good people who are out there trying to help and are leaving their homes and their families and putting their lives in danger are not unnecessarily subjected to danger.”

The governor says the state is looking into using the E-Z Pass system to track trucks and enforce the tractor trailer ban.