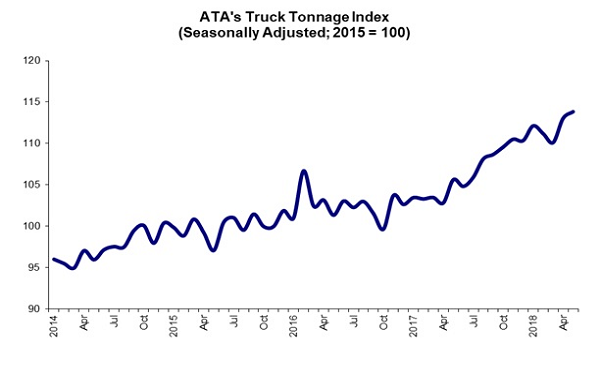 American Trucking Associations’ advanced seasonally adjusted For-Hire Truck Tonnage Index rose 0.7% in May after rising 2.7% in April. In May, the index equaled 113.8, up from 113 in April.

ATA revised the April increase from the originally reported 2.2% to 2.7%.

The not seasonally adjusted index, which represents the change in tonnage actually hauled by the fleets before any seasonal adjustment, equaled 118 in May, which was 7.6% above the previous month.

“This continues to be one of the best, if not the best, truck freight markets we have ever seen,” said ATA Chief Economist Bob Costello. “May’s increases, both sequentially and year-over-year, not only exhibit a robust freight market, but what is likely to be a very strong GDP reading for the second quarter. However, in the near-term, look for moderating growth rates for freight simply due to more difficult year-over-year comparisons, not from falling tonnage levels.”

ATA calculates the tonnage index based on surveys from its membership and has been doing so since the 1970s.