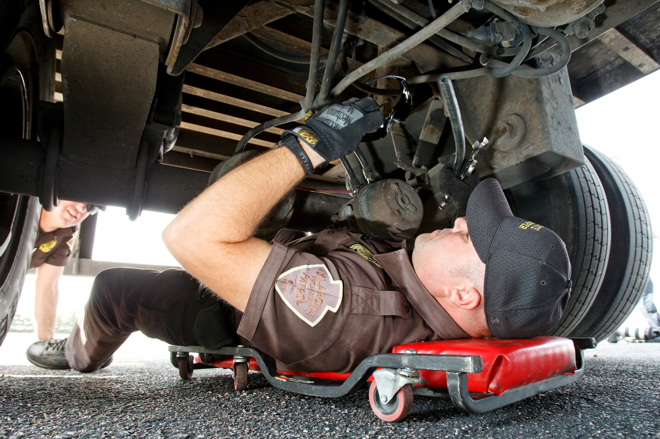 A total of 11,531 inspections were conducted for Brake Safety Day.

In all, 1,595 commercial motor vehicles were placed out of service for brake violations. That’s 13.8 percent of the total number of vehicles inspected.

A total of 52 jurisdictions participated – 41 U.S. states and 11 Canadian provinces/territories.

In the U.S., 14 percent of commercial motor vehicles were placed out of service for brake violations.

In Canada, 12.4 percent of commercial motor vehicles were placed out of service for brake violations.

86.2 percent of the total number of commercial motor vehicles inspected did not have any critical brake-related vehicle violations.

8,128 air-braked trucks and tractors were identified as requiring ABS; 10.2 percent had ABS violations.

5,331 trailers were identified as requiring ABS; 14.3 percent had ABS violations.

CVSA holds brake-focused enforcement events throughout the year to identify and remove commercial motor vehicles with dangerous brake issues from roadways in an effort to reduce the number of crashes caused by or made more severe by deficient braking system performance.

“Inspecting, identifying and removing commercial motor vehicles with brake violations from our roadways is critical to the safety of the traveling public,” said CVSA President Capt. Christopher Turner with the Kansas Highway Patrol. “Brake systems that are improperly installed, neglected or poorly maintained reduce braking efficiency and increase stopping distances of trucks and buses, posing a serious transportation safety risk.”

Brake Safety Day and other brake-related enforcement, education and awareness initiatives are part of the Operation Airbrake Program sponsored by CVSA in partnership with the Canadian Council of Motor Transport Administrators and the Federal Motor Carrier Safety Administration.

CVSA is holding another brake safety enforcement event this year, Brake Safety Week, which is scheduled for Sept. 16-22 at participating jurisdictions throughout North America. The week is an annual outreach and enforcement campaign designed to improve commercial motor vehicle brake safety.