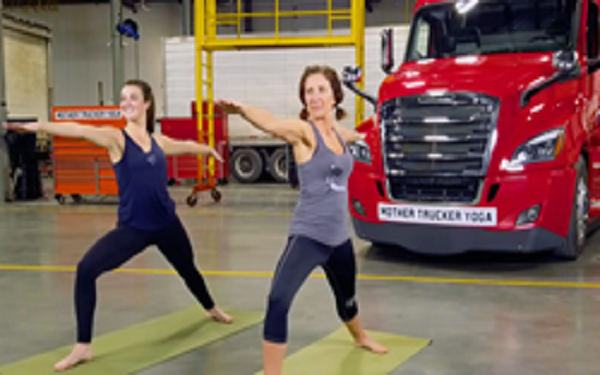 Yoga For Truckers? Improve Your Health And Enjoy Life On The Road

Driving a truck is hard on the body. There are some 7 million drivers on the roads. 87% of trucking accidents involve driver error and 12% are due to drivers falling asleep, heart attacks and health problems. In 2017 the University of Utah did a study proving that poor health in truck drivers has a direct relation to the accident rate. The average crash rate among all truck drivers is 29 per 100 million miles. This statistic jumps to 93 per 100 million miles for drivers with three or more health ailments.

But how many truck driver’s have considered yoga? Probably not many. Enter Mother Trucker Yoga. Mother Trucker Yoga offers trucker fitness and wellness solutions for the transportation industry and beyond, by offering online subscriptions for corporations and individuals.

Mother Trucker Yoga co-founder, Hope Zvara, wants to transfer the proven benefits of yoga to the trucking industry. Nearly two-thirds of yoga users reported that as a result of practicing yoga they were motivated to exercise more regularly, and 4 in 10 reported they were motivated to eat healthier. And More than 80% of yoga users reported reduced stress because of practicing yoga.

The program offers 3-5 minute, short, fun and effective videos focused on directly pinpointing all the aches and pains associated with long-term sitting and driving.

It has been designed to provide instant relief and long-term success.

Ms. Zvara has been teaching yoga to all age groups over the past 17 years. “Yoga truly is for everyone, and like many of us, truckers are sitting all day, with limited movement, broken sleep patterns, heightened stress and limited resources available to them to make the changes they know they need to make,” says Zvara.

Co-founder, Phil Knuckey is a business owner in the trucking industry and was inspired by Ms. Zvara’s message and teachings. Mr. Knuckey had been paralyzed from the waist down before recovering most of his mobility. “Even with my limited mobility, I was able to do the yoga that is provided via video instruction for truckers,” said Mr. Knuckey. “So, if I can do it, anyone can do it.”