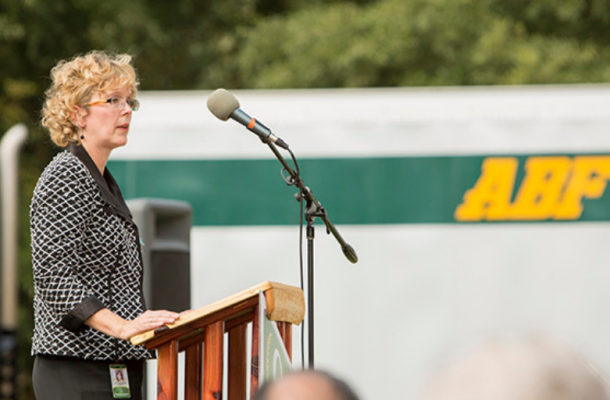 McReynolds has been in the logistics and transportation space for over 28 years; 21 of them being at ArcBest. During her tenure at ArcBest, revenue increased over 110% and employment increased by 26%.

“Early on in my career, I decided I wasn’t going to make gender an issue or allow other people to do so. When I was named President and CEO in 2010, I was one of very few women in that role in the logistics industry. Our industry traditionally has a lot of male representation, although there is clearly a recent trend toward more female representation,” said McReynolds.

“At ArcBest, we believe in promoting the best person for every role. As long as companies are focused on putting the best people in leadership, more of our industry’s leaders will be women.”

Judy McReynolds also serves on a variety of boards and maintains outside leadership roles including chair of the American Transportation Research Institute board, and is a member of the American Trucking Association’s Board of Directors and Executive Committee.

President and CEO of Women In Trucking, Ellen Voie, said, “Judy McReynolds has been a visible advocate for women in the trucking industry and we are so proud to honor her with this year’s ‘Distinguished Woman in Logistics Award.’ She has embraced diversity and her company’s performance is evidence of the results. We’ve been tracking ArcBest’s success through our annual WIT Index of publicly traded companies and Judy and her team have been the leader in promoting women in both leadership roles and board seats and we applaud her accomplishments.”

Previous articleDistracted Driving Enforcement From On High
Next articleDiesel Up Again