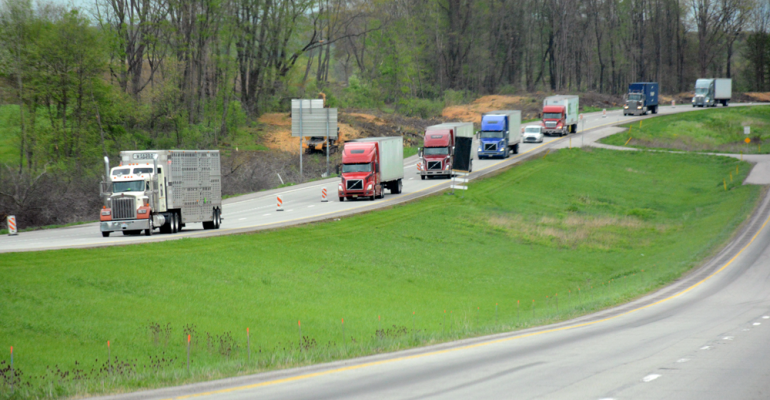 “So far this year, the turnover rate at large truckload fleets is up ten percentage points,” said ATA Chief Economist Bob Costello. “The extreme tightening of the driver market – driven by solid freight demand – will continue to challenge fleets looking for qualified drivers.”

The jump for carriers with more than $30 million in annual revenue set the churn rate at its highest point since the fourth quarter of 2015. In the first half of the year, turnover is averaging 96%, putting 2018 on pace to be the highest annual rate since 2013.

At the same time, the turnover rate at smaller truckload fleets slipped one percentage point to 72%.

“There is something happening with turnover at these smaller fleets,” Costello said. “The driver market remains tight across the truckload sector, but the turnover rate at these smaller carriers is down 14 points from the same time last year. Like large carriers, small truckload carriers have been aggressively raising pay this year, which has helped their turnover rate level off.”

Turnover at less-than-truckload fleets also jumped four percentage points to 14% – the highest mark for this traditionally stable sector since the first quarter of 2013.

“While much lower than the truckload sector, seeing this kind of jump in the LTL market tells me that this sector is struggling with drivers more than in the recent past,” Costello said, “and suggests the industry’s issues finding qualified drivers are continuing to deepen across the board.”

How to Match Your Needs With A Company’s Needs

The trucking industry has a lot of standardization. The rules are the same, the pay scales are similar, the equipment is almost identical. So, how do you choose

the right company for whom to drive?

Well, you have to look a little deeper to really find the differences. What truly separates trucking companies is how they are managed and how they work with and treat their employees. Being treated as “just another warm body” or a “truck number” is no way to develop a relationship or build a career.

Start by Asking the Right Questions

From the outside, a lot of trucking companies can appear to be the same, but internally they are all very different, and not every company will be a good fit for you. In order to understand what the job will be all about, you will need to start by asking the right questions.

# 1 Ask About the Company

Asking questions about the company will give you a lot of insight into their internal operations. Things to consider asking:

#2 Ask About the Freight, Lanes, and Trips

Asking questions about the freight, lanes, and trips will inform you about the basic requirements to which you will have to commit.

•        Do they frequently move freight to or from unusual locations?

•        What additional responsibilities are expected from you for specialized freight?

# 3 Ask About Driver Relationships with the Company

Asking questions about how you will be treated will let you know if you are part of the team, or just a warm body filling a truck number.

•        What is the company’s policy on asking for time off for important life moments (Vacations, birthdays, the birth of a child, etc.)?

Where to Ask These Questions

Knowing the right questions to ask is just part of the battle. Knowing who to ask and where to look for answers is the next part.

# 1 Start by Finding the Company Online

The easiest place to start is online. Before you even apply for a job, you should have answers to some, if not all of your questions. Most trucking companies today have a website that will provide you with tons of information. From there, you can dive deeper by checking into their social media accounts.

#2 Talk to Drivers Who Work for the Company

Drivers like to talk, so if you see a driver from a company you are interested in working for, start up a conversation. Just be warned that some drivers can be very negative, no matter how good a company is.

They may be having a bad day, or perhaps they just got dispatched on a crummy lane that they hate taking, there are a plethora of reasons for the negativity. We always suggest talking to more than one driver from any company so that you can weigh the good with the bad, the positive with the negative.

# 3 Talk to the Recruiter

Talking to the company recruiter is the place to go to have any remaining questions answered and to fact check what you have discovered from talking to drivers and researching the company online. Now, of course, talking to recruiters needs to come with a warning of caution, as not all recruiters are created equally. Some recruiters are paid based on the number of recruits they bring in.

These recruiters will say anything to get you into an interview, even a truck, chances are, once you’ve signed the dotted line, you will never see them again, so it doesn’t matter that they lied. Other recruiters serve dual roles with the organization of a company, these recruiters are the ones you will see on a regular basis because they are part of the dispatch team, or the safety team, or some other internal operations of the company. These recruiters tend to be upfront with you about the details of the job; after all, you will be seeing them again, and no one enjoys dealing with angry truckers.

Most trucking companies today, are great to work with, you just need to focus on finding the right fit for you, because not all companies are the same. Just as you will be interviewed, you must interview your potential employer. Whether you are a company driver or an owner-operator, you need to know what you are looking for in a company and what you want to accomplish in your career. Knowing what your priorities are will help you find a company that will fit your expectations.

The Manitoba government has scrapped the carbon tax from its Made-in-Manitoba Climate and Green Plan.

Premier Brian Pallister made the announcement today, saying, “We are standing up for Manitobans, by saying ‘yes’ to Manitoba’s green plan, and ‘no’ to a carbon tax.”

The provincial government had announced in April it would implement a flat tax rate on carbon of $25 per ton with no increases, which was set to kick in this past September. The tax was expected escalate the cost of diesel by 6.7-cents-per-liter, equating to the Manitoba Trucking Association (MTA) said would be an estimated $50 million in fuel tax paid by heavy diesel vehicles in the province.

The Manitoba government planned to impose the carbon tax in its Made-in-Manitoba plan to avoid the federal government from stepping in and doing it for them.

“Our Made-in-Manitoba plan proposed a flat, fixed tax rate that would provide stability to consumers, business, industry and agriculture,” Pallister said in April “It would save Manitoba families and businesses more than $260 million over five years, compared to the Ottawa plan. Most importantly, all monies collected under our plan would be returned to Manitobans, in the form of tax reductions.”

The government received some pushback from the trucking industry for not directing carbon tax revenue into fuel efficiency initiatives.

But Pallister said the federal government planned to implement a carbon tax on Manitobans regardless.

“Ottawa acknowledged that our plan is the best in Canada,” Pallister said. “But they have also stated that they will impose their higher – and rising – carbon tax on Manitobans after one year. This would mean twice the tax, for poorer results. That would threaten jobs and economic growth throughout our province and take money off the kitchen tables of Manitoba families.”

Terry Shaw, executive director of the MTA, said though no one wants tax increases, the industry still supports trucking efficiency policy and programming.

“The previous reality was that if a carbon tax on heavy diesel vehicles was going to be collected, it should be invested in heavy diesel efficiency,” said Shaw. “We can still partner on efficiency policy and programming for our industry and we have heard, informally, from the government they are still intending on doing so.”