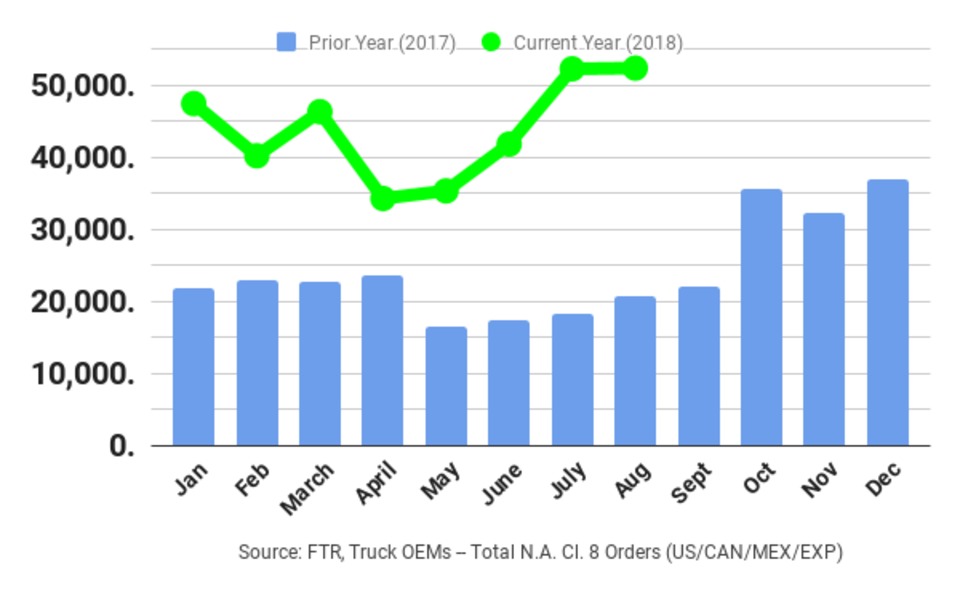 Preliminary North American Class 8 orders for September continued to surge, coming in at 42,300 units for the month.

The third quarter 2018 also set an all-time record with 146,800 Class 8 orders. September Class 8 order activity was the 10th best month ever, but with most of 2018 hitting all-time highs, was only the 5th highest monthly volume this year. Sturdy freight growth continues to strain industry capacity and fleets are placing orders a year out to secure new truck availability throughout 2019. North American Class 8 orders for the past twelve months have now totalled 497,000 units.

Don Ake, FTR vice president of commercial vehicles, commented, “The pressure is on fleets to add capacity to keep up with a robust freight market. The economy is surging right now, putting stress on shippers to find trucks to deliver goods on time. Fleets don’t want to be stuck in the same situation next year, so they are placing huge orders for trucks well ahead of time.”

“The focus now turns to the supply chain. Parts and component suppliers have struggled to keep pace with the growing OEM builds this year. Demand, as indicated by the surge in orders, will be even stronger next year. It is uncertain if suppliers can meet this challenge, as they compete for workers and materials in a vibrant economy.”

Women In Trucking Association and Freightliner Trucks announced three finalists for the 2018 Influential Woman in Trucking award. This is the eighth year for the award which was developed in 2010 as a way to honour female leaders and to attract and advance women within the trucking industry.

The award highlights the achievements of female role models and trailblazers in the trucking industry. The nominees for the award included women from all over the industry in various roles.

The 2018 Influential Woman in Trucking award finalists are:

Angela Eliacostas has more than 30 years of experience in transportation, working her way from the ground up. Following generations of relatives with expertise in the transportation industry, Angela made the natural transition to her own career by learning the processes at trucking companies to running third-party logistics. Angela is an industry leader in expediting shipments and serves as a liaison between carriers and companies. She has grown a reputation in the energy and power logistics space. Angela has been recognized for making AGT Global Logistics one of the top 50 in Illinois and top 1000 woman-owned businesses in the United States.

Nozuko Mayeza is a passionate truck business owner who hails from South Africa. She has managed to make inroads into a male-dominated sector for over seven years. She is the finalist for Women in Africa awards 2018 and the chairperson of the Black Business Council subcommittee on Commercial and public transport. Nozuko is a mentor to females in trucking both in South Africa and Ghana.

Brooke Willey leads the HR function for CRST International as Vice President of Human Resources, a $1.7B transportation company comprised of seven operating companies with 9,500+ employees and driving partners/owner operators. Her passion is building strong leaders and leadership teams and has been publicly recognized for those efforts. Under her leadership development efforts, in 2016 CRST was named a ‘Top-10 Best Private Company for Leaders” by Chief Executive magazine. In 2017 CRST was named a ‘Workforce Leader in Training’ by the Corridor Business Journal and Kirkwood Community College. Brooke is also actively involved with non-profit organizations in her community, most recently a board member for United Way and Young Parents Network.

All three finalists have been asked to participate on a panel at the WIT Accelerate! Conference & Expo held in Dallas, Texas November 12-14. The winner will be announced at the general session panel discussion, “Hard-Won Lessons from Trailblazing Women” on Tuesday, November 13 from 8:45 am – 10:00 am. The panel will be facilitated by Joann Lublin, News Editor, The Wall Street Journal.

ProMiles reports national average retail price for diesel on Monday being up 7.2 cents from the week previous.

Increases were recorded for every region, from 4.6 cents higher than last Monday in New England to 9.2 cents in West Coast states excluding California.

A key difference between the EIA and ProMiles reporting is the type and number of fuelling stations the company surveys in order to calculate its averages. While EIA surveys 400 truck stops and convenience stores nationwide, ProMiles uses its direct feed from thousands of truck stops to develop its averages.

Following are the average prices by region as reported by the ProMiles.com: