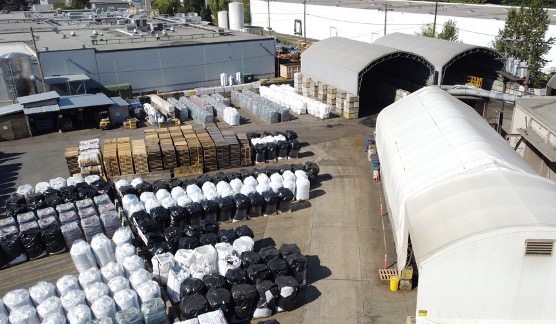 There’s a lot of rubber on British Columbia’s roads but it’s not often you see a golden tire.

You can find one at the headquarters of Western Rubber Products. While this single tire sits on a pedestal at the WRP office, approximately 99,999,999 of its predecessors have been shredded at the site before this tire was spared—and gilded—as the 100,000,000th sample to be collected from around BC. Thanks largely to the work done by Western Rubber Products, a division of Liberty Tire Recycling, British Columbia has become a world leader in recycling car, truck, and off-road tires into a wide variety of rubber products.

“This type of work is critical,” Delta, BC mayor George Harvie told staff and management while visiting the facility to mark Waste Reduction Week. “You should be proud of your efforts. Western Rubber’s successful waster reduction model and sustainable practices help us work towards a zero-waste economy.”

Tires that aren’t responsibly recycled create all kinds of environmental havoc. They fill up landfills or, worse, are discarded in our natural environment. When dumped in backyards or empty lots, tires can become a serious, toxin-emitting fire hazard, or can fill with water where they provide breeding habitats for insects including disease-carrying mosquitoes.

The way in which tires were recycled in the province of BC underwent a revolution thanks to a 2006 policy shift moving responsibility from the provincial government to private industry. Among other things, this led to the creation of a new regulatory agency Tire Stewardship British Columbia (TSBC), the organization that now oversees the collection and recycling of tires in Canada’s westernmost province. Their success has been arguably unmatched by any other jurisdiction on the continent. British Columbia now recycles over 99% of car and truck tires—elsewhere in North America the average rate is closer to 50%.

There are a number of reasons for that success. One is the strong role that BC’s commercial trucks and trucking contractors play in getting scrap tires to shredding facilities quickly and efficiently. Another is the gradual centralization of provincial tire recycling operations. In the last few decades the province has seen 13 different tire recycling companies come and go until eventually only Western Rubber Products persevered. According to regional vice president Neil Bansal, the company now plays an essential role in the recovery and rubber repurposing process. “As the province’s primary tire recycler, we’re the only company with the critical mass necessary to handle both the pick-up and the processing of millions of tires every year at the end of their roadworthy life,” he says.

On an average work day, 20 fully loaded semi-trailers and 250 metric tonnes of tires arrive at Western Rubber. Approximately 5.2 million tires per year are transported, sorted and processed on their way to new life in a variety of recycled products. Even so there is capacity for more—the operation could handle at least seven million tires annually—more than enough to meet even increased demand in the province.

Recycled tires are processed by stages into rubber crumbs and mulch, with wire and fibre removed and recycled separately. From there the recycled rubber goes in to a variety of products including artificial turf for football fields and rubberized playground surfaces, so that a fall from a jungle gym results in a bounce rather than a break. Research is also leading to progress in the production of graphene and then into products like value-added concrete. 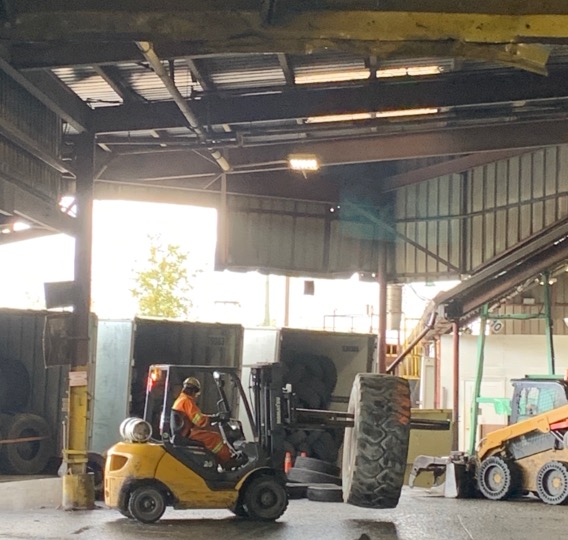 Bansal says the ultimate goal for the industry will be true recycling, with old tires eventually becoming essential components of new ones. Currently however, a relatively small amount of recycled rubber material is used to make new tires. According to Amy Brackin, Liberty Tire’s vice president of market development, about 18 million pounds of recycled North American rubber ends up in new tires as carbon black, obtained through pyrolysis and other means. “There is more recycled content being used in off-road tires for mining and agricultural use,” Brackin says. “As of now we don’t use as much in truck and passenger tires.”

Regardless, Liberty Tire is investing in cutting-edge research that holds promise for the future. Innovations in areas like devulcanization (a process that will turn used tired back into virgin rubber) have exciting potential to significantly increase the amount of recycled rubber in new tires. The process illustrates the goals embodied in effective waste reduction. It’s only fitting, Bansal points out, that old tires should eventually go full circle.