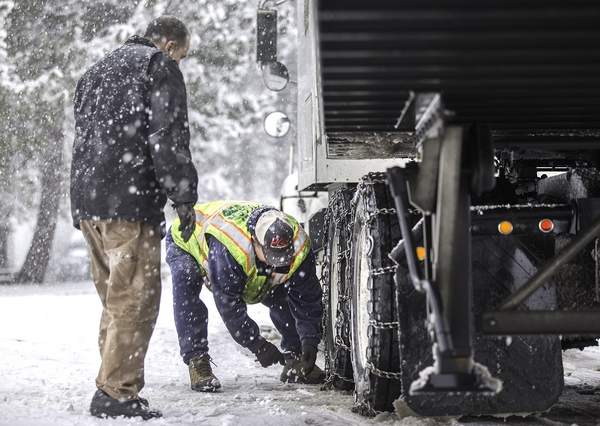 “I have heard from people and communities throughout the province that we need to take action to improve safety on our highways. With that in mind, our government is moving quickly to implement changes that will ensure people are able to get where they need to go more safely through the winter months.”

Stricter commercial vehicle chain-up requirements are the  first priority named by the government, and the the ministry says it will enforce higher fines for commercial vehicle operators not carrying chains, or who don’t chain up when mandatory. Currently, the fine in B.C. is $121, while in other North American jurisdictions the fine is up to $1,200 for similar violations, ten times higher. The exact fine amounts are yet to be determined.

The government will also roll out a pilot program limiting which lanes commercial vehicles can use on certain corridors, which will reduce the risk of collisions, and blockages due to spun-out trucks. On key three-lane highway sections during winter, commercial vehicles will be restricted from using the far left lane, to ensure more reliable and safe access for the traveling public. When all lanes are blocked, the ability for emergency crews and maintenance equipment to move along the highway is eliminated, compounding the closure.

Ministry staff will also be expanding monitoring and auditing of road-maintenance contractors, including 24/7 compliance checks during winter storms. Snowplows will also be getting GPS tracking.

The current regulations requiring drivers to fit winter tires or chains from October 1st to March 31 will also be extended in certain areas of B.C. The ministry will expand the date range through to April 30th on select highways and mountain passes to account for potential early spring snowfall events which occur regularly in the Northern regions of the province. The exact routes where the winter tire rules will be extended has not yet been determined.

Another small change announced today that could have a big impact in this part of B.C. is a reduction in the highway abrasive standard size. The government said that the standard size of grit used on roads will be decreased from 12.5 to 9.5 millimetres to reduce potential windshield damage. Across the entire province, road crews apply 750,000 tonnes of winter abrasives over 1.2-million kilometres on average every winter.