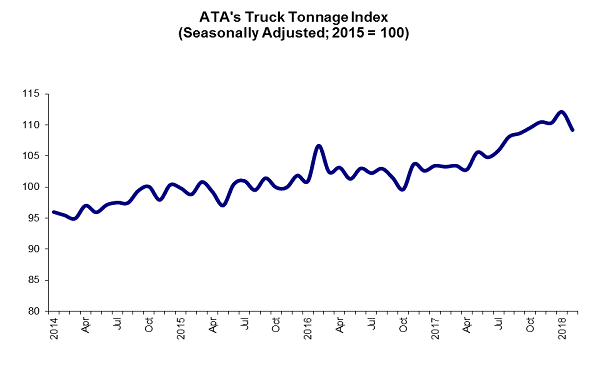 Truck Tonnage Slightly Down In February, But Still Up From Last Year

American Trucking Associations’ advanced seasonally adjusted For-Hire Truck Tonnage Index declined 2.6% in February after rising 1.6% in January. In February, the index equaled 109.2, down from 112.1 in January.

The not seasonally adjusted index, which represents the change in tonnage actually hauled by the fleets before any seasonal adjustment, equaled 99.7 in February, which was 6.7% below the previous month (106.8).

“Despite a softer February than January, freight remains robust as exhibited in the year-over-year increase,” said ATA Chief Economist Bob Costello. “The drivers of truck freight – personal consumption, factory output and construction – are good, plus the inventory cycle is in favour of motor carriers, so I expect freight tonnage to grow at a decent pace in the months ahead.”