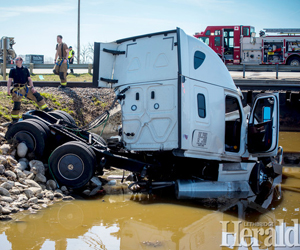 The driver of a tractor-trailer unit was injured when his truck and a train collided just east of Lethbridge Thursday, April 26.

RCMP Staff Sgt. Glenn Henry said it happened just before 10 a.m. The truck turned from Highway 3 westbound onto Range Road 211 and was struck by an eastbound train at the adjacent crossing. The tractor unit ended up in the St. Mary River Irrigation District canal next to the road, while the empty trailer wound up in the ditch on the other side of the rail line next to Highway 3.

Henry said the driver, a middle aged male from Calgary, was trapped inside the truck and had to be extricated by the Lethbridge Fire Department personnel.  He was taken to hospital in Lethbridge with non life-threatening injuries.

Coaldale RCMP, Canadian Pacific Police, and Lethbridge Fire/EMS were among the responders at the scene. Diesel fuel was believed to have spilled into the canal, and environmental crews were called to assist with the cleanup.

The train moved on from the scene around an hour after the crash. Westbound traffic on Highway 3 was reduced to one lane until 12:30 but, the Range Road was closed for several hours to facilitate removal of the semi and its cab.

The railway crossing on Range Road 211 was controlled only by signs, one of which was knocked down by the collision.

This wreck is but one of approximately 40 that will continue to happen unless truck drivers remember crossing railway tracks requires additional attention.