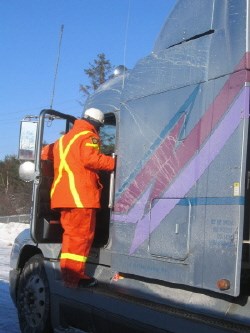 A call from a concerned citizen led OPP to investigate a possible impaired driver Monday afternoon.

Standard Field Sobriety Tests were given and the driver was subsequently arrested for impaired driving.

More tests were completed at the North Bay OPP Detachment by a Drug Recognition Expert and, as a result, Timothy Stafford, 52, of Armstrong Township, just north of New Liskeard, was charged with Operation While Impaired – Blood Drug Concentration.

Stafford was issued a 90-day Automatic Drivers Licence Suspension and the truck was impounded for seven days.

He was released on a Promise to Appear and is scheduled to appear at the Ontario Court of Justice in North Bay, on February 5.