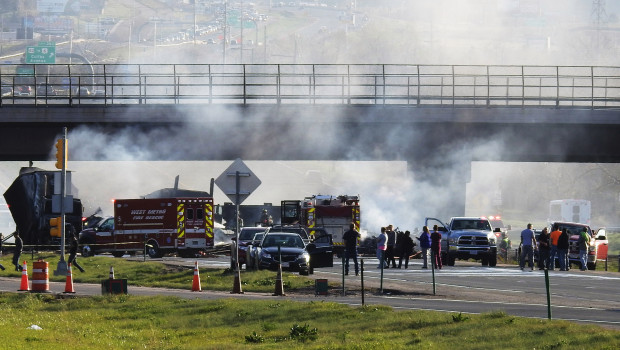 Bond was set Saturday for the 23-year-old truck driver, Rogel Lazaro Aguilera-Mederos, alleged to have driven a semitrailer into stopped traffic in the Denver area on Thursday, killing four people.

He was ordered by the court to surrender his passport if it was not destroyed in the collision. He also was ordered to remain in Colorado and not drive a commercial vehicle. His next scheduled court date is Friday, May 4. Formal charges are expected then. He is being held on suspicion of four counts of vehicular homicide.

The chain-reaction collision happened around 4:50 p.m. local time on Thursday, April 25, at the Denver West Parkway bridge over I-70 in Lakewood, Colo., in the Denver area. The semi was eastbound when it hit the other vehicles, which included 24 passenger vehicles and four tractor-trailers.

Traffic was at a near standstill because of a previous collision on I-70 west of there.

Castellano 03 Trucking has five trucks and five drivers, according to the Federal Motor Carrier Safety Administration. The FMCSA’s Safety Measurement System has them listed as a company with no safety rating. They have 23 violations in the vehicle maintenance category, with four of those being brake-related.

The Jefferson County Coroner’s Office on Sunday identified the crash victims who died in the incident as four Colorado men:

The investigation into the crash is ongoing. The Lakewood Police Department has set up a tip line for anybody with information about the crash.