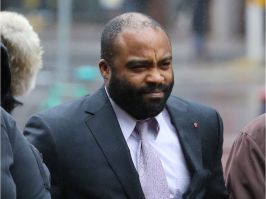 In 2015, Andy Nevin, 39, was cycling along Leitrim Road in Ottawa’s South end when Deinsberg St-Hilaire’s pickup truck smashed into him, killing Nevin. Then St-Hilarie fled the scene went to substantive lengths to hide his involvement in Nevin’s death.

St-Hilaire never stopped his vehicle after striking Nevin, who was thrown some 60 feet off his bike and into the ditch where he was left to die alone on June 28, 2015. The judge accepted St-Hilaire’s story during trial that he fell asleep at the wheel only to be awoken by a loud bang. He kept on driving when he checked the rear-view mirror and saw nothing amiss.

The Ottawa landscaper who covered his tracks and hid from police after a deadly hit-and-run has been spared jail time by a judge who accepted his explanation that a fear of turning himself in was heightened because he’s a “man of colour” afraid of racist police.

He was doing 80 kilometres an hour in a 50-kilometre zone. It was 5:55 a.m. and he was returning from a wedding after-party. He testified he’d only had one glass of wine the entire night. It was his brother’s wedding and he was the best man. St-Hilaire got behind the wheel of a F-250 Ford pickup after being awake for 22 hours.

He tarped the truck that was all over the news, had it repaired and took it to the car wash. He also went into hiding and checked in at a motel out by the airport.

While the judge said St-Hilaire’s fears didn’t justify his callous actions in covering his tracks, she accepted his fear of police was genuine — just like his “deep remorse and shame” for killing Nevin.

Ottawa police detectives worked the case around the clock and had St-Hilaire under surveillance before arresting him nine days after the hit-and-run.

St-Hilaire was found not guilty of dangerous driving causing death in 2018, but plead guilty to obstruction of justice.  The judge noted that St-Hilaire’s fear of racist police was connected to past traffic stops where he said he’d been treated unfairly.

The maximum penalty for obstruction of justice is two years in prison, but Ontario Superior Court Justice Catherine Aitken instead sentenced St-Hilaire to 100 hours of community service. In the conditional sentence, delivered Wednesday, the judge also gave St-Hilaire a curfew of 10 p.m. for one year, unless it’s snowing. (She wanted to accommodate his winter snow plow job.)

The judge outlined how St-Hilaire went to church, and had endured racism and bullying in the schoolyard growing up because he was a poor black immigrant.

When Justice Aitken delivered her not guilty verdict, she called it a circumstantial case, and said the Crown fell short of proving St-Hilaire’s guilt beyond a reasonable doubt.

The sentence:  100 hours community service and a ten p.m. curfew unless there’s a snow storm.

In the other case, a man of colour, a man who accepted immediately responsibility for his action which was basically a mistake that not one single driver hasn’t experienced, thankfully, for the most part without further incident.  A man who was an immigrant but not yet a citizen.  A man filled with true remorse.  The resultant crash killed 16 and injured 13 therefore revenge, emotional sentencing takes hold and the resulting sentence was 8 years in prison, a driving ban, and upon completion of the sentence this man will undoubtedly be deported, if he doesn’t succumb to an untimely death by suicide.