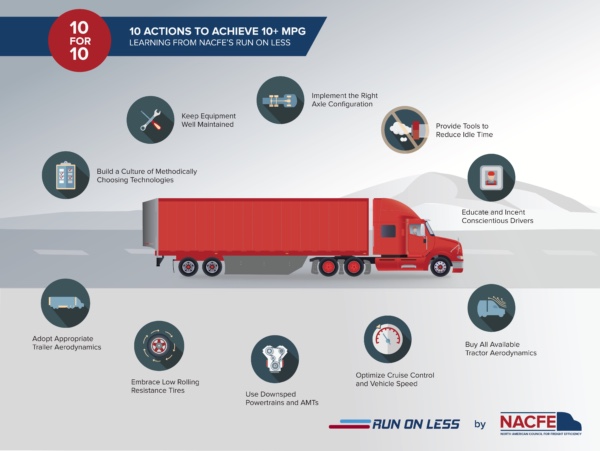 Run on Less From NACFE

The North American Council for Freight Efficiency unveiled a new look and redesigned website (www.nacfe.org) as it widens its focus beyond the fuel-saving equipment and components on the road today.

The organization’s original goal was to promote the doubling of freight-moving efficiency. And the recent Run on Less event proved that target is “pretty practical”, said executive director Mike Roeth, during a briefing at the Technology and Maintenance Council’s annual meeting.

“Ten miles per gallon does happen in the real world. It does happen hauling goods. It’s not all about running empty downhill,” Roeth said, admitting that the demonstrated fuel economy was higher than expected.
Participating trucks averaged 87 km/h over 17 days, collectively covering 80,600 km, and averaging gross weights of 55,000 pounds.

A second Run on Less is now in the works, and proposals for that have included Canadian or Mexican runs, owner-operators running older equipment, and day cabs. New data sets could even look at factors such as traffic.

Meanwhile, the council has unveiled plans for new Guidance Reports, the first of which will explore the potential of electric vehicles and be released this spring.

“What we’ve decided to do is guide future change,” Roeth said, referring to how these will differ from the council’s 16 Confidence Reports that have explored about 70 existing technologies. Those reflect confidence in technologies compared to the anticipated paybacks.

“We are now looking at future products that are coming down the road,” he said. “The future becomes the emerging, becomes the now.”