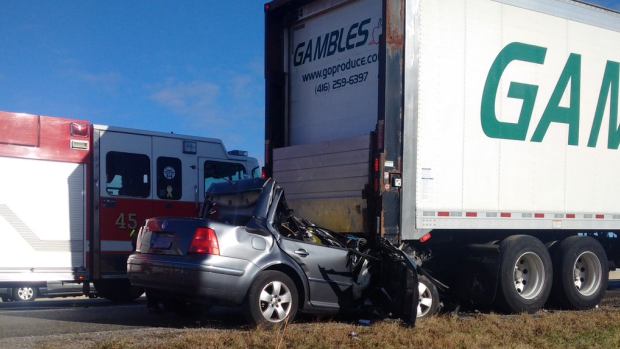 Playing Government Without A Clue.

When Ontario introduced the speed limiter law there were a whopping 2,500 wrecks annually in all of Ontario involving commercial vehicles.  Commercial vehicles also include small pickup style trucks used for commercial purposes.  The speed limiter law was introduced based on these outrageous statistics, and something just had to be done to protect the general public.   Did it work?  Not even close, today the number of wrecks only on OPP patrolled highways topped 6,500 and that doesn’t include those wrecks on roads patrolled by other police forces, like municipal roads.

Control the speed limit of trucks, they said.  It’ll be safer, they said.  Except it isn’t but they won’t admit it was and is a failure.

The government in all those years did not significantly increase the level of policing so the speed controlled trucks became the road blocks to slow traffic down.   All it did was increase the levels and degrees of road rage.

In a paper titled “Safety and Operational Impacts of Setting Speed Limits Below Engineering Recommendations,” researchers at Pennsylvania State University’s Department of Civil and Environmental Engineering looked into what happens with crash rates when speed limits are lowered. They found that it all depends how much you decrease the speeds.

When speed limits were lowered 5 mph below engineering recommendations, researchers discovered a statistically significant reduction in fatalities and injuries, property damage only and total overall crashes. However, areas where speed limits were 10 mph below recommendations experienced a decrease in property damage only crashes, but fatality/injury crashes increased.

“For a variety of reasons, including the presence of school zones, citizen requests, political pressure, and perceived safety issues, posted speed limits are sometimes lowered to values below engineering recommendations,” the study says. “In fact, a recent survey of state highway transportation agencies found that this practice is fairly common throughout the United States.”

Due to small sample sizes, the effects of speed limits 15-25 mph below engineer recommendations were considered “less clear.” However, results did reveal an increase in total, fatal/injury and property damage only crashes.

The study did not collect data on increased speed limits.

However, researchers did cite previous studies that suggest when speed limits increase, driving speeds increase but “by an amount less than the speed limit increase.” Studies also suggest that increasing speed limits leads to higher crash frequency and severity.

“Large reductions in the speed limit might simply not be obeyed by some drivers, since other roadway cues are not consistent with the low posted speed limit,” researchers concluded. “This could create large variations in operating speed among drivers, which might possibly explain some of the increased crash frequencies.”

Previous article
Weigh Stations Source Of Revenue
Next article
What if Trucks Stopped?