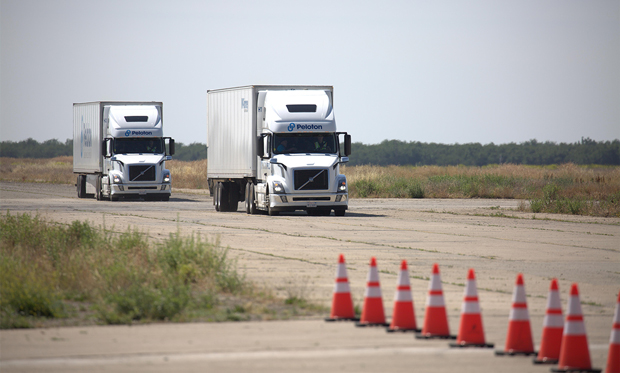 Silicon Valley startup, Peloton, focuses on a unique angle in the race for autonomous truck driving technology. The company plans to use computers, sensors, and vehicle-to-vehicle (V2V) technology to allow one trucker to drive two trucks.

The two trucks will move one in front of the other. Drivers will drive the truck in front as they normally would. Whenever the trucker adjusts his foot on the throttle, touch the brakes, or maneuvers the steering wheel, those actions are digital transmitted to a computer that’s built into the following truck. With that information and the second trucks own unique sensors it can safely trail the truck in front.

Pelton Founder, Josh Switkes, said, “A lot of the tech challenges get dramatically simpler when you are following another vehicle… you aren’t worrying about what is way ahead—just about not hitting the car in front of you, and watching for other vehicles that might try to get in between you and that car.”

Although Switkes had no previous trucking experience he made it a point to earn a learner’s permit so that he can get behind the wheel of large trucks. Now, he has a better appreciation for what truckers do and says the experience was daunting.

With his new experience behind the wheel and his technological background, Switkes hopes Peloton will make trucking more efficient through automation.