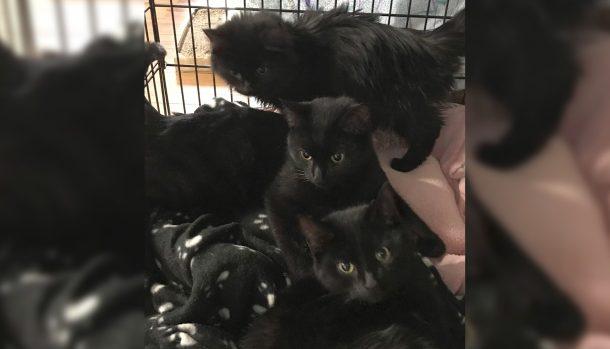 Last Sunday, January 6, a truck driver near the farming community of Cormack, NL spotted three kittens in a snowbank on the side of a road. The driver pulled over, rescuing the kittens and took them to a local animal shelter.

Tanya Wight of Deer Lake Kitty Rescue was the first to take the kittens (now named Shiver, Stormy, and Flurry) in.

“They would just kind of lie there, I think, totally traumatized. Their bodies in shock from the experience,” she said.

The shelter has received a stream of adoption inquiries for the three kittens; however, they’re too unhealthy to be given a new home at the moment. Eventually, all three animals will be available for adoption via the NL West SPCA in Corner Brook.

Tanya Wight says that if the driver hadn’t of stopped to retrieve the kittens, they eventually would’ve been covered by snow from a passing snow plow.