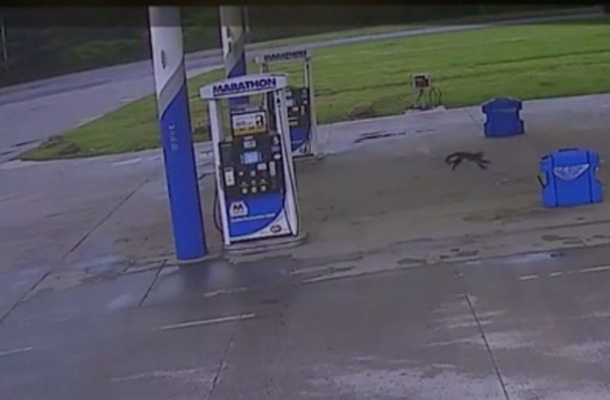 Monkeying Around At A Truck Stop

A five-year-old monkey named Teeko escaped from the home of his owner, Anthony Thomas, in Braceville Township, Ohio, on the evening of June 8 and spent his morning at a small local truck stop.

On Monday, June 9, around 6:40 AM, a truck driver spotted Teeko in the parking lot of the Marathon on Braceville Robinson Road running between semi trucks and baring its teeth in an ‘aggressive manner.’

The trucker then told the truck stop worker, Jessica Richardson, who was skeptical. “I thought they were joking around with me,” she said.

Later that day, Jessica saw Teeko herself and called 911. Teeko’s owner soon arrived at the truck stop to catch his pet; however, the monkey was not cooperating. “As the owner came up, the monkey seen him and the monkey took off this direction, behind the red and blue truck, and the owner chased him all the way back around the parking lot,” Richardson said.

She added, “I was shocked, like, I thought the monkey might come up to somebody or get taken or we have huge semis driving through here all the time. I was like ‘What if a semi accidentally hit it?’”

Finally, around 8 AM, Thomas had recaptured Teeko and brought him safely back to his home.