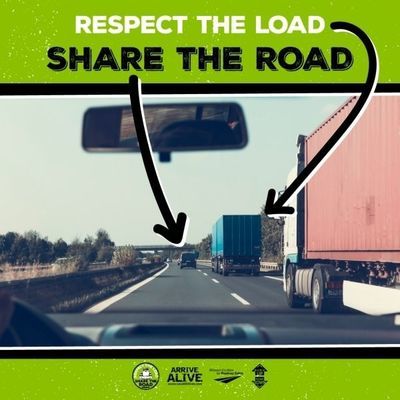 On Monday, a statewide campaign urging drivers to drive safely around big rigs begins in Missouri. The message of the commercial motor vehicle awareness campaign from the Missouri Department of Transportation is “Respect the Load. Share the Road.” It discourages aggressive driving by motorists when around tractor-trailers. It is scheduled through the rest of August.

Radio, television, sports outlets and other media will be part of the campaign, said Kelly Jackson, MoDOT senior communications specialist.

The campaign will be heard on Pandora and Missourinet radio.

On television, it will be seen at Fox Sports during Cardinals and Royals games and on ESPN during NASCAR and other programming, Jackson said.

The campaign is focused on areas of higher crash rates, which means the state’s major metropolitan areas, Jackson said.

In addition, expect to see tractor-trailers with a round 24-inch advertisements with the message “Respect the Load. Share the Road.”

Missouri Department of Transportation acknowledges in a new release the vital role that commercial motor vehicles play in the state’s economy.

“When crashes involving tractor-trailers happen, the disproportionate size of the large truck versus a car means those crashes can often involve serious injuries or worse,” MoDOT says in the news release. Research shows that in the majority of these crashes drivers of passenger cars unnecessarily endanger themselves by not paying attention and driving aggressively around big rigs.”

The Missouri Coalition for Roadway Safety and MoDOT offer the following tips for driving safely around tractor-trailers:

MoDOT also advises drivers of commercial motor vehicles to do their part by resting up, obeying speed limits, avoiding distractions and buckling up.