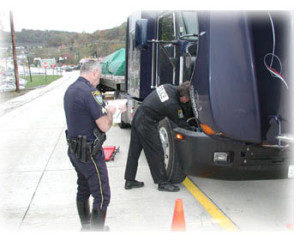 State Sen. Dave Schatz has added a section to his state bill specifying “roadside safety inspections shall not be performed on the shoulder of any highway with a posted speed limit in excess of 40 miles per hour.”

“Just last Friday I was leaving the radio station and a concrete truck was pulled over by the CVEU on a road with no shoulder right there in Sullivan,” he said. “And that brings another aspect into this. These stops are impeding commerce. Concrete is a perishable commodity and if I was the guy at the other end of a project waiting for it I would be infuriated by the unnecessary delay.”

Schatz also said he saw an 18-wheeler pulled over on the side of Interstate 44 up against a guardrail.

Schatz added he’s fine with laws being enforced and the inspections performed if another infraction has occurred, but would like to see them done in a safe place instead of on the side of the road.

“There are two weigh stations in Franklin County, they can do the inspections there, or use the ramps into the highways,” Schatz said. “They are pulling over commercial vehicles solely for random inspections simply to fill their quotas and maintain the parameters of their grant.”

Franklin County Sheriff Steve Pelton says it is always risky to pull any driver over on the side of a roadway.

“We do that all the time for everybody,” he said. “I don’t understand why he (Schatz) is bringing this up now. By limiting the stops and enforcement to roadways with speeds under 40, stops us from patrolling the main areas where the most commercial traffic is.”

Pelton added there are no ticket quotas associated with the program, but the grant requires a certain number of “contacts” with the public either through traffic stops or educational meetings with companies with commercial vehicles.

The sheriff’s department confirmed the stops can be made without probable cause, but only to commercial vehicles. They also confirmed the cement truck Schatz saw pulled over in Sullivan was 18,000 pounds overweight.

The county CVEU has been in operation since December of last year and all data from stops is passed on to MoDOT.