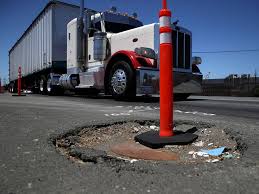 In March, Gov. Rick Snyder signed into law a supplemental spending bill to accelerate the timetable for getting pothole repairs underway throughout the state. Specifically, an additional $175 million is provided for repair work.

The Republican governor said that the new money will contribute to the $800 million more in new state funding available.

A 2015 law is billed to fix the state’s ailing road and bridge system. The $1.2 billion Republican-backed funding deal includes authorization of an annual transfer from the state’s general fund to roads in addition to fuel tax and vehicle fee increases. However, the funding does not take full effect until 2021.

Pothole reimbursement
In the meantime, one group of Democrat-introduced bills focuses on costs related to vehicle damage caused by potholes. HB5815-5817 are intended to simplify efforts for drivers to file claims for reimbursement from the state.

HB5817 would increase the amount the state can reimburse a driver for pothole-related damages to $5,000 – up from $1,000. Higher reimbursements are possible now only through lawsuit.

Michigan law limits reimbursements for damages related to potholes to locations a road entity is aware of a need for repair. The entity is responsible for making repairs within 30 days.

HB5816 would limit the maximum response time for repairs to seven days.

Pothole tracking
The third bill in the package, HB5815, would require the Michigan Department of Transportation to create a website for the public to track where and when potholes have been identified. Information must remain posted for 30 days after the pothole is fixed or filled.

The rules would apply only to claims against the state.

Advocates say changes are needed. They point to figures provided by MDOT that show only 31 of 717 requests for pothole-related payments were approved over the most recent three-year period.

“Drivers should have access to pothole reports so that they receive the compensation they deserve,” Rep. Leslie Love, D-Detroit, said in prepared remarks. “If the state insists on claiming ‘insufficient notice,’ then they should have to prove they were unaware.”

She added that without providing information to the public, it is impossible to tell when the state was notified.

The bills are in the House Transportation and Infrastructure Committee.

“For the majority of Michiganders, our state’s dangerous roads take a toll not only on them, but on their pocketbooks as well,” stated Rep. Adam Zemke, D-Ann Arbor.

To address the issue, Zemke has introduced HB5969 to create a refundable tax credit for expenses incurred as a result of vehicle body damage caused by poor road conditions.