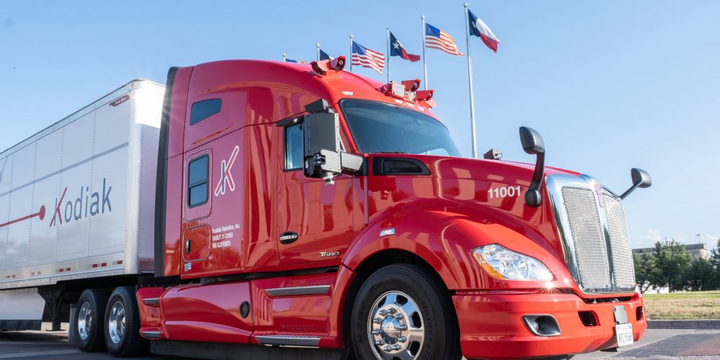 Kodiak Robotics announced it will support its quick growth and freight operations from a new facility in North Texas.

Kodiak, founded just 16 months ago, and has started making its first commercial deliveries with a safety driver behind the wheel.

Currently, Kodiak operates as a true freight carrier, with a fleet of trucks dedicated to servicing its customers in Texas. The main difference between Kodiak and traditional carriers is that Kodiak operates self-driving trucks on “middle-mile” highway routes.

“We’ve done extensive testing in simulation, on closed test tracks, and on public roads in California. Now, we’re continuing to build out our fleet for testing and delivery in Texas,” said Kodiak in a web post.   The company emphasized that it is “building for production, not prototypes.”

“Demonstration runs are important, but it’s critical that you don’t chase a perfect demonstration at the expense of a production vehicle. We’re not building proofs-of-concept, we’re building a solution. It’s one thing to make a delivery with the cameras on, but it’s another to make thousands of deliveries that meet your customers’ needs over the life of a truck. Trucks are built for a million miles, and that life cycle demands an autonomy stack that can also last through Texas thunderstorms and summer heat. We’ve taken a top-down, systems engineering approach that draws on our team’s experience to build a system ready for these challenges. It is this above all else that sets us apart.”

The company also said that their self-driving trucks will make Texas highways safer while reducing the cost to carry freight on longer routes. Furthermore, the company said that their commitment to the Lone Star State will help further the state as a leader in transportation and logistics.

“We could not be more excited to announce our expansion into Texas, with an office in the DFW area,” said Don Burnette, CEO and co-founder of Kodiak Robotics, in a press release. “In just over a year, we’ve gone from founding Kodiak to putting our trucks on the road and hauling freight for customers… As industry veterans, we’ve seen where self-driving technology has fallen short, and have a clear vision for how to make it work and work safely.”