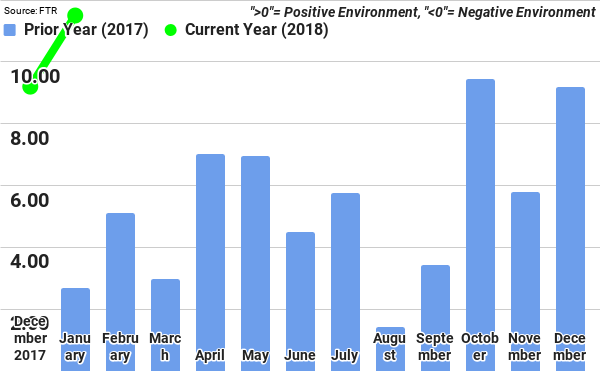 The Freight Transportation Services Index, which is based on the amount of freight carried by the for-hire transportation industry, fell 0.4 percent in January, after reaching an all-time high in December, according to the U.S. Department of Transportation’s Bureau of Transportation Statistics. The January 2018 index level of 132.3 was 39.7 percent above the April 2009 low during the most recent recession.

The level of for-hire freight shipments in January, at 132.3, was the second highest all-time level, 0.4 percent below the all-time high of 132.8 one month earlier in December 2017.

The Freight TSI measures the month-to-month changes in for-hire freight shipments by mode of transportation in tons and ton-miles, which are combined into one index. The index measures the output of the for-hire freight transportation industry and consists of data from for-hire trucking, rail, inland waterways, pipelines and air freight. The TSI is seasonally-adjusted to remove regular seasons from month-to-month comparisons.

Decreases in rail carloads, rail intermodal, pipeline and water resulted in the January decline of 0.4 percent while trucking and air freight increased. The TSI decline was consistent with the Federal Reserve Board Industrial Production index, which dropped by 0.1 percent in January, led by a fall in mining.

Despite the 0.4 percent decline from the all-time high of 132.8 in December, the January Freight TSI remained at its second highest level of 132.3. The decline followed three successive monthly increases during which the index rose 2.8 percent from September through January. For the year from January 2017, the index rose 6.3 percent. The January index was 39.7 percent above the April 2009 low during the most recent recession.