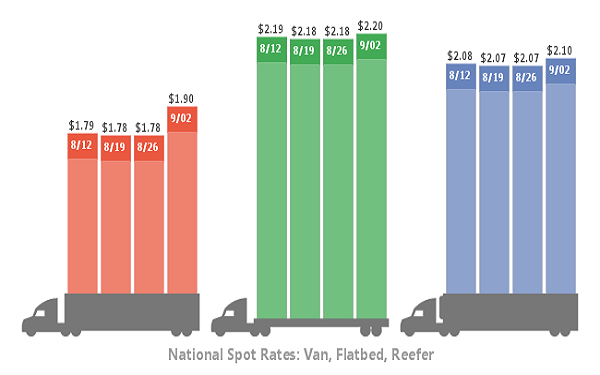 The week ending Sept. 2 was the first full week following Hurricane Harvey, which devastated Houston and other towns along the coast.

Nationwide, spot market loads were up 2.9% while spot market capacity was down 4.3%. Van rates rose all across the country last week, following Hurricane Harvey. The national average van rate jumped up 12¢ to $1.90 per mile, and they are continuing to rise this week. Flatbed rates rose 2 cents while reefer rates were up 3 cents.

Most of the major van markets had fewer outbound loads available, though, and most regular freight heading to Houston was canceled. Outbound volumes from Houston also fell 73%, but the rearrangement of supply chains, the difficulty of shipping in the flooded region, and increased seasonal demand in other parts of the country combined to create pockets of tight capacity that put extra pressure on truckload rates.

Another cost of Hurricane Harvey is that many Houston-area refineries were offline, and some remain closed for now. Diesel prices shot up 15¢ due to the resulting disruption in the fuel supply. Diesel costs $2.76 per gallon now as a national average, and it may go higher this week.

The loads that did move out of the Houston market area paid significantly more last week, with outbound rates up 20% on average. Dallas rates also soared, as some freight was diverted to that busy freight hub. Rates rose in Columbus, as well, as population centres in the Northeast are receiving more freight from that direction. Less freight moved northward out of the Southeast last week, as trucks were moving loads west to the South Central states, a region that is ordinarily serviced out of Houston. The Southeast, especially Atlanta, is also the main source of relief supplies — including plywood, ice, and bottled water — headed for Florida in advance of Hurricane Irma.

The effects of Hurricane Harvey on the refrigerated segment were less dramatic, but there was still disruption in the spot market. Rates continue to rise on many lanes this week for reefers, as well as vans.

Of course, the biggest disruptions were down in Texas, and the big changes largely mirrored van trends. The number of reefer loads moving from Dallas to Houston was way down, but rates jumped up to $4.29 per mile. Denver to Houston reefer rates also rose 63¢ to $2.53 per mile.