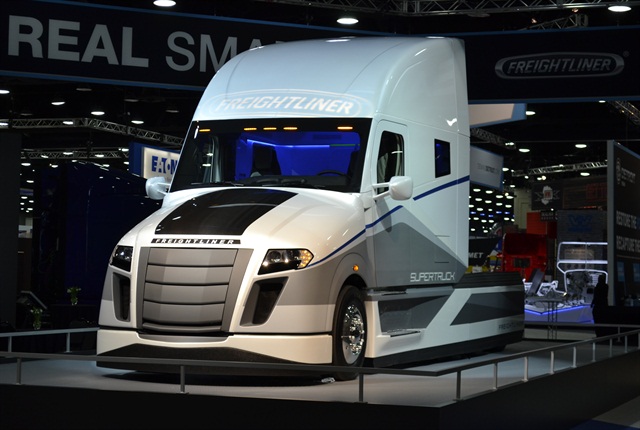 Gets an average of 12.2 miles per gallon, incredible 115% mpg improvement

Freightliner has unveiled the result of its SuperTruck project, and it lives up to the name.
The tractor-trailer was developed in partnership with a five-year, $115 million Department of Energy program that challenged truck makers to improve big rig fuel economy by at least 50 percent, and match the funding by the same amount.
Freightliner did that, and more. Its loaded 65,000-pound semi returned 12.2 mpg during a real world highway test, 115 percent better than the average truck on the road today.
The SuperTruck features a hybrid drivetrain with an 11-liter diesel engine and electric motor. Most of its accessories, including the air conditioning are run off the battery, instead of belts attached to the engine. There’s a waste heat recovery system that uses the exhaust to generate additional electricity by boiling water like a power plant, and solar panels on the roof of the trailer that can fully run its climate control system on a sunny day.
The computer-controlled transmission is connected to the navigation system and can plan its shifts ahead of changes in the terrain, even shifting into neutral to coast under certain circumstances, like when it’s cresting a hill. On the way down, the electric motor helps slow the truck down and charge the battery.

And aerodynamic design also plays a key role in the SuperTruck’s efficiency. It has a laid back windshield, skirted wheels, and extenders on the side of the tractor that close the gap between it and the trailer, where the air can get very turbulent in conventional trucks. The grille automatically closes to streamline things even more, opening only when engine cooling is needed, while the suspension can lower the front of the truck at highway speeds.

A newly-designed frame and lightweight materials used throughout its sleeper cab help reduce weight, and an on-demand steering assist system only draws power when the wheels are turned.

The SuperTruck would save a typical long haul trucker around 10,000 gallons of fuel per year, which translates to over $28,000 at today’s prices, but it’s only a concept, and not destined for production as it is. However, Freightliner has already been integrating several of its features, like the smart transmission and some of the aerodynamic tweaks, into its latest products.