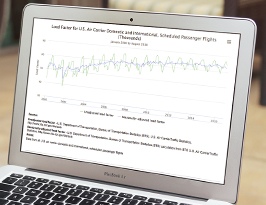 The U.S. Department of Transportation’s Bureau of Transportation Statistics reports that in June trucks moved more than 63 percent of NAFTA freight – with trains, planes, ships and pipelines picking up the rest. All five modes experienced an increase in freight year to year.

Compared to June 2016, freight was up nearly 8 percent. This marks the eighth consecutive month of year-to-year increases. Nine of 12 months experienced a loss compared to the previous year in 2016.

June’s rise was the third largest year-to-year increase this year, trailing May and March. In March, the index reached more than $100 billion for the first time since October 2014.

Trucks carried more than $63 billion of the $99.8 billion of imports and exports in June. Rail came in second with more than $15 billion.

More than 58 percent of U.S.-Canada freight was moved by trucks, followed by rail at more than 16 percent. U.S.-Mexico freight went up by more than 9 percent compared with June 2016. Of the $48.7 billion of freight moving in and out of Mexico, trucks carried nearly 70 percent of the loads.