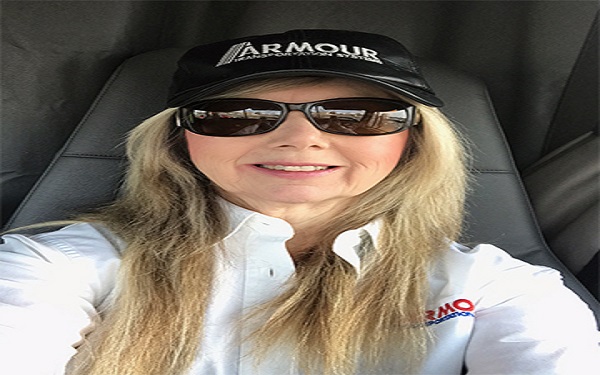 Canadian Named Women In Trucking Member of the Month

Canadian Named Women In Trucking Member of the Month

Women In Trucking Association announces Susie De Ridder (Lyons) as its June Member of the Month.

Susie, a Fredericton, New Brunswick-based company driver with Armour Transportation Systems, knew from an early age what she wanted to be when she grew up. Even as a little girl riding along with her truck-driver dad, there was no question that driving a truck is what she was cut out for.

After graduating from Fredericton High School in the late 70s, Susie sought out a local trucking company to work for. She learned the business inside out, first from an office desk, and also out in the yard where one of the company’s seasoned mechanics took her under his wing and taught her to drive “the old-school way.”

Her dad was behind her all the way from the beginning, but her mother took a bit more convincing. She was worried about her little girl moving away and driving to strange parts of the country on her own; it was the potential dangers of the job that concerned her, but it never crossed her mind that Susie wouldn’t be able to do the job.

In 1984 Susie headed for Toronto to launch her career as a truck driver, and after getting a couple of years on the road under her belt, she headed west – and south – to California where she spent the next 15 years working for US-based companies hauling dry vans and reefers across North America. For years, Susie hauled strawberries from California to the Toronto Food Terminal, so you might say she got “home” at least once a week.

There’s never been a day that Susie has regretted her career choice. It’s not all sunshine and roses, but Susie takes the big-picture view. “Sure, I’ve had my share of bad deliveries and I’ve made a wrong turn or two, but I always look ahead to positive. After all, out of the thousands of days and the millions of miles I’ve driven, what’s one bad day?”

In 2001, Susie moved back to Ontario and worked for a company that sent her on the road in a custom-built 1987 359 Peterbilt, a favourite on the show truck circuit. Its distinctive 320” wheelbase and 147” hood turned a lot of heads and earned her a spot on a coveted Cat Scales trading card.

In 2013, Susie moved back to Atlantic Canada and has been working for Armour Transportation Systems ever since. She loves her career, and puts a great deal of effort into promoting a positive view of the trucking industry.

In 2015 she won the People’s Choice award in WIT’s I Heart Trucking contest for her photograph entitled “Susie tearing up the blacktop from coast to coast” and her “Trucks are for GIRLS” entry was first runner up last year.
In addition to being a WIT member, Susie is the Atlantic Canada board representative for the Women’s Trucking Federation of Canada.

She takes every opportunity she can to encourage women to consider a trucking career, especially young women as they begin to make career choices. She recently wowed students at her old alma mater when she accompanied her company’s recruiting staff to FHS’s career fair, and there’s nothing she loves more than promoting the industry at Touch-A-Truck events and truck shows.

Susie has seen many changes in her 35 years on the road, and misses some of the old ways; the pace of trucking has sped up and there’s less time to socialize with others as the ‘mom and pop’ diners disappear. And when they do stop, drivers are more likely to grab a take-out meal than sit at the counter and chat.

The smartphone has replaced the CB in many instances; not necessarily a good thing, according to Susie. The CB was a safety net, when you could rely on other drivers for local traffic reports, weather conditions and directions, or when you might need help roadside or even a friendly voice to keep you company on a lonely stretch of highway.

But Susie doesn’t spend much time longing for the “good old days.” Trucking is her passion, and she has no intention of hanging up her keys anytime soon.

Her advice to new drivers? Do your research and find a forward-thinking company to work for, one who trains and mentors its drivers, understands the importance of work-life balance and shares drivers’ safety concerns, for both equipment and personal well-being. “Communication is key,” says Susie. “Find a company you can talk to, whether it’s about your equipment or the kind of freight you’re hauling, or perhaps a suggestion you have to smooth out a problem. The smart companies will listen to the ideas you bring from the road to make the job better for everyone.”