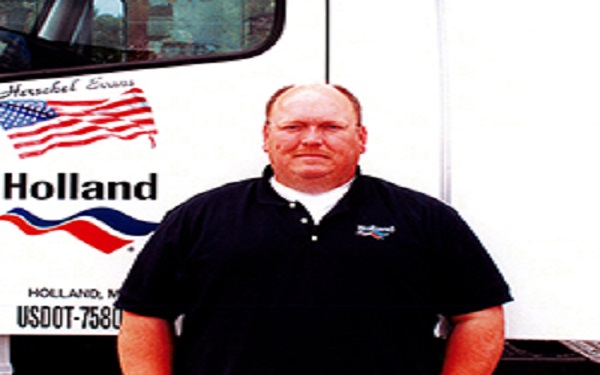 The Commercial Vehicle Safety Alliance named Herschel Evans of the trucking company Holland as the winner of the 2018 International Driver Excellence Award. Evans has driven more than 3 million miles over 30 years; 25 of those years with Holland.

“After my company nominated me, I read the impressive bios of the previous winners and I did not think I belonged in that group,” said Evans. “I feel extremely honoured to be selected.”

Launched in 2015, IDEA recognizes commercial motor vehicle drivers who distinguish themselves conspicuously and beyond the normal call of duty through the achievement of safe operation and compliance carried out with evident distinction for an extended period of time.

Like many commercial motor vehicle drivers, Evans truly loves what he does. “It is never the same day twice,” he said. “There is nothing boring about driving for a living. You get to see the inner workings of many different places. All of the places that make your community run are kept running by us drivers delivering what they need. Every day has a sense of doing something that is necessary.”

“Herschel is an exceptional model for what a professional driver should be,” said Holland President Scott Ware, who nominated Evans for the award. “His unquenchable desire for great safety and his need to share his safety message make him a key participant in our organization’s safety efforts. He is committed to protecting himself and all those who share the road with him.”

In 2013, Evans became the first person from Holland to be selected by the American Trucking Associations for the high honour of representing the trucking community as an America’s Road Team Captain. ATA’s America’s Road Team is a national public outreach program led by a specially selected group of professional truck drivers who share superior driving skills, remarkable safety records and a strong desire to spread the word about safety on the highway. America’s Road Team Captains speak at schools, with community groups, to reporters, legislators, industry and government officials about highway safety and the importance of the trucking industry.

In fact, Evans considers being selected as an America’s Road Team Captain to be one of the biggest professional accomplishments of his driving career. “The opportunities and experience that I’ve gained have been immeasurable,” said Evans. “Being part of this group of professionals is hard to describe. Being mentored by the veteran Captains and now passing my knowledge on to the new Captains, I believe, has a massive impact on our industry.”

As you might expect for such an extraordinary driver, CVSA’s IDEA isn’t the only award Evans has received throughout his career. In 2012, he was honoured with the Destination Green Environmental Excellence Award for his efforts toward environmental sustainability. He was also honoured by ATA in 2017 with the Mike Russell Trucking Image Award, an award that recognizes individuals who are committed to promoting the advancement of the trucking industry’s positive message.

Evans has also donated his time and services to the Convoy of Care, helping to deliver critical supplies to families affected by major natural disasters such as the flooding in Baton Rouge, Louisiana, in August 2016, tornado victims in southern Georgia in February 2017 and the flood victims in Houston, Texas, in August 2017.

“Some drivers demonstrate their safety focus at a personal level by racking up remarkable records of collision-free driving,” said Ware. “Other drivers devote their attention to promoting safety among other drivers and the public. Herschel Evans is a ‘do-it-all’ champion of safety who does both – training trainers and dedicating most of both his business and personal time with tireless efforts to make our roads safer and help save lives.”

Evans serves as Holland’s safety advisor, driver trainer and DOT compliance leader. He is also an active member of the Holland Safety Committee and serves on the Holland Safety Review and Editing Board. He is a member of the YRC Accident Review Board and a volunteer for the Mid-Atlantic Professional Truck Drivers Association. And on top of all of that, Evans also routinely holds ATA practice sessions on his own time, providing the materials at his own expense.

“Herschel’s motivation is not simply to provide himself with the opportunity to practice but to increase safety awareness and promote a positive image for all professional drivers,” said former Atlanta Terminal Manager Lyle Metcalf.

A perfect example of Evans’ commitment to the safety of all drivers was when he put together the “Battle of the Borders” which allowed Holland and YRC Freight employees to practice together for the state truck driving competition. “Herschel spearheaded the event,” said Tim Coffey, safety manager for YRC Freight. “He really put a lot of hard work and dedication into making the event very successful in its first outing.”

“There is no doubt that Herschel is a great driver but what sets him apart is his willingness to organize activities and help others. It is that willingness that has made him a great resource for the Holland safety department,” said Holland’s former Manager of Safety Chris Ashford. “In my opinion, he is our driver of the year every year.”

With decades of driving experience and millions of crash-free miles driven safely on the road, Evans knows exactly what to do to ensure he is operating safely.
“When I talk to young drivers, I always tell them that space and time are your two best friends on the road. You need space to maneuver and time to decide and react. Lots of crashes could be prevented just by drivers giving themselves more space and time.”

“One day at a time. One mile at a time. You can never be in such a hurry that you take chances. Taking chances has such a small benefit for the enormous risk. It just simply isn’t worth it.”

Evans will be presented with his award on April 9, 2018, at the CVSA Workshop in Portland, Oregon.

CVSA established IDEA to recognize and officially acknowledge the exceptional careers of professional commercial motor vehicle drivers and their commitment to public safety. As a company dedicated to creating a safer, stronger future, AIG joined with CVSA to sponsor the Alliance’s 2018 International Driver Excellence Award.

When he’s not on the road, Herschel and his wife Hollie like to travel around the country and see new places. “I also enjoy hunting and competition shooting of varied types,” Herschel added. “And I compete in archery and handgun events.”