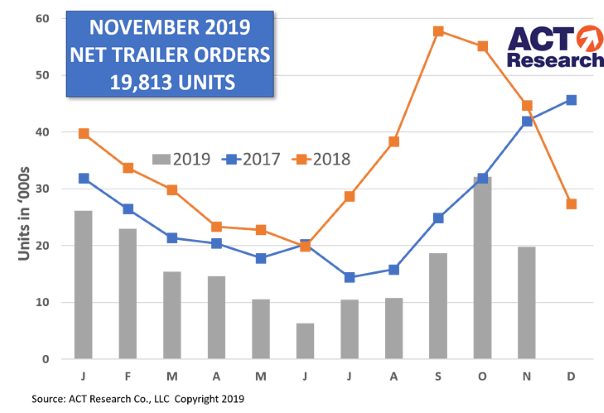 COLUMBUS, IN – New US trailer orders of 21.2k were down 43% month-over-month in November, and after accounting for cancellations, net orders of 19.8k dropped 38%, after hitting their fourth consecutive sequential rise in October. Longer-term comparisons show net orders down 56% year-over-year and 52% compared to the first 11 months of 2018, according to this month’s issue of ACT Research’s State of the Industry: U.S. Trailer Report. However, the report reminds readers that the year-over-year comparison is to the second-highest order month in history.

ACT Research’s State of the Industry: U.S. Trailers report provides a monthly review of the current US trailer market statistics, as well as trailer OEM build plans and market indicators divided by all major trailer types, including backlogs, build, inventory, new orders, cancellations, net orders, and factory shipments. It is accompanied by a database that gives historical information from 1996 to the present, as well as a ready-to-use graph packet, to allow organizations in the trailer production supply chain, and those following the investment value of trailers and trailer OEMs and suppliers, to better understand the market.

“Not surprisingly, the dramatic revisions to fleet investment plans are reflected in both power units and trailers,” said Frank Maly, Director–CV Transportation Analysis and Research at ACT Research. He continued, “While still making money, margins are being squeezed, and as a result, cap-ex shrinks. In some cases, comments on fleets postponing scheduled replacement have been heard.”

Additionally, Maly said, “With industry fleet consolidation, the swings, both positive and negative, can be exacerbated; we’re seeing that impact on the current orderboard. Seasonal patterns projected November to be 2019’s strongest month, but on a seasonally adjusted basis, November volume was off 42% month-over-month and down 54% year-over-year.”