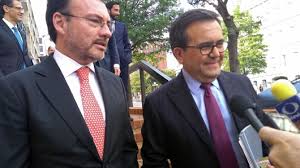 U.S. Mexico NAFTA Agreement Nears Completion, Canada, Not So Much

U.S. and Mexican trade negotiators are “hours” away from squaring away differences on revising the North American Free Trade Agreement but work with Canada is likely to stretch into September, a top Mexican official said yesterday.

Mexican Economy Minister Ildefonso Guajardo said that coming to an agreement with Canada, which has sat out the latest phase of NAFTA talks, would take at least a week, but he was optimistic Mexico and the United States were close to agreement.

“I would say that we’re practically in the final hours of this negotiation,” he told reporters as he arrived for talks at the offices of U.S. Trade Representative Robert Lighthizer.

The Mexico-U.S. discussions have focused on crafting new rules for the automotive industry, which President Donald Trump has said is his drive to rework the 24-year-old pact he says has been a “disaster” for American workers.

Industry sources say they are close to agreeing on raising the regional automotive content threshold for tariff-free access under NAFTA to around 75 percent from 62.5 percent.

Since Mexico’s July 1 presidential election, which was won by President-elect Andres Manuel Lopez Obrador, the bilateral talks have been complicated by divisions between the incoming and outgoing Mexican administrations over energy policy.

Jesus Seade, the incoming Mexican government’s chief NAFTA negotiator, said the issue had been “ironed out” at the NAFTA talks, without going into detail. He said this week it was not a “substantive” matter and that Lopez Obrador’s team had wanted to check the terms were consistent with the Mexican constitution.

If three-way talks run into September, final approval of the deal in Mexico will likely pass to Lopez Obrador, because under fast track authority, the U.S. Congress needs 90 days’ notice to vote on a new NAFTA once the renegotiation is finished.

Lopez Obrador is due to take office on Dec. 1.

Canadian Foreign Minister Chrystia Freeland said on Friday her government’s return to the talks would depend on how quickly the United States and Mexico could resolve their differences.