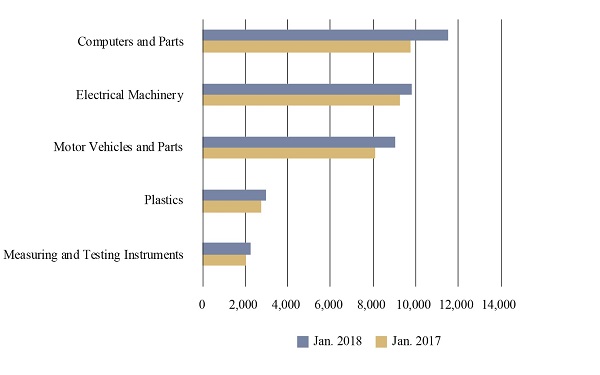 Trucks Hauled $60 Billion Worth Of Freight In January

Trucks moved freight valued at $60.6 billion between the U.S. and fellow North American countries, Canada and Mexico, in January 2018, up 10.2 percent compared to January 2017, according to the U.S. Department of Transportation’s Bureau of Transportation Statistics. Rail moved freight valued at $13.3 billion, up 0.6 percent during the same period.

The top commodities moved were computers and parts valued at $11.5 billion, electrical machinery at $9.8 billion, and motor vehicles and parts at $9.0 billion.

U.S.-Canada freight flows in both directions in January 2018, were $6.8 billion by pipeline, $2.2 billion by vessel, and $2.1 billion by air. Almost all of pipeline freight between the U.S. and Canada were mineral fuels, primarily oil and gas.