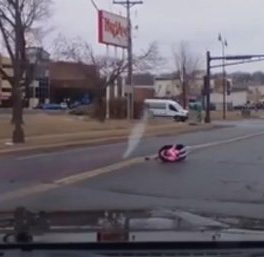 Trucker Rescues Toddler that Flies Out of a Moving Vehicle

On Monday, January 14, 2019, Chad “Cheddar” Monk was driving down Minnesota Street in Mankato, MN, when he noticed a small child in a car seat that had tumbled out of a moving vehicle and into his truck’s path. In an effort to rescue the toddler, Mock stopped his truck and got out, waving his arms to get oncoming traffic to stop. Authorities showed up shortly after.

Mock posted on Facebook after the incident, “If it didn’t happen in front of me, I’d never believe it. The child was ok. The parents came back. Paramedics and police checked the child out as well.”

The Public Safety Department in Mankato stated in a news release that the child that fell out of the moving vehicle was securely belted into a child safety seat but the seat and the car door weren’t properly secure.

Although officers and paramedics who arrived at the scene determined the toddler to be uninjured; authorities are searching for the child’s mother and are seeking to charge her with child endangerment and with not properly restraining a small child in a vehicle.