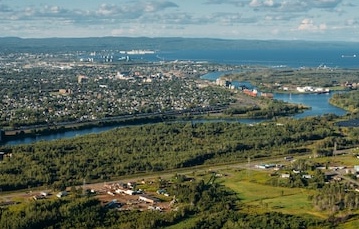 At any given moment there are tens of thousands of cross country trucks going in both directions across the country converging on the city of Thunder Bay through which two major cross country highways are merged and are one.

There are many reasons for the way Thunder Bay has developed and the dearth of trucks passing through but the fact is it has evolved to what it is and this convergence, the solution to which was supposed to be the 102 bypass, has Thunder Bay residents and the supply chain industry at each other’s throats.

So far, reason has prevailed, but there are indications that reason is about to be replaced by “I don’t care. I want trucks banned from my street” mentality.  Not what is more convenient and less costly for the entire population of Canada,   Make no mistake that extra half hour is going to cost big money.

Now, shopping centre owners are getting into the fray because they don’t want overnight parking of trucks on their lots.   That’s not typical nimbyism because they actually own the space and have every right to say who or what uses their property.

The problem is that Thunder Bay because of its geographic location and the evolution of development of Provincial roads has become a host to long haul truckers like it or not.

The solution, of course, would be build a truck road parallel to the railway on the north side of Lake Nipigon where the road would terminus at close to Shabaqua Corners and Geraldton, separating highway 11 from 17 through Thunder Bay.   That would also necessitate the creation of truck services on the new road.

That new road would remove more than an hour of travel time, which would reduce the cost of shipped goods across Canada.  In this world of trying to reduce carbon this would provide  actual ways of so doing in the long term.   Even, if and when trucks are electrified, that hour of travel time saving could become critical.

Any move toward common sense of course is always thwarted in Canada, so don’t ever expect it to happen ever in these Thunder Bay issues.