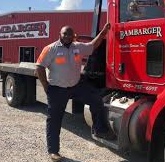 André Harris doesn’t think of himself as a hero, but most people would agree that saving an infant from a burning car is pretty heroic.

The Tuscaloosa tow truck driver was finishing up a job when he saw smoke coming from a car.

“I saw a flame coming up from between the engine compartment and the firewall,” he said. “I noticed a lady running up, so I popped on the beacons and asked if anyone was in the car.”

The woman had flipped her car and her 7-month-old son was trapped inside.

“Next thing I knew, I was down the hill trying to bust the glass with my hand,” he said. “I got it broken and was reaching in the car, literally fumbling around. I couldn’t see because of the smoke. I felt a tiny leg and just started pulling.”

The woman had suffered minor injuries. Harris was worried the car could burst into flames, so he held the baby in his left arm and pulled the mother up the hill with his right.

“We got to the top of the hill, I looked back and the whole compartment where the baby had been was engulfed in flames. It wasn’t until the adrenaline wore off that I’d realized what happened.”

Harris grew up the eighth-born in a close family with nine children and says helping people is how he was raised. “If we’re put in a position to be a blessing to someone, I think we should take the opportunity,” he said.

“It happened so fast,” the baby’s mother said. “If he wasn’t there, I don’t know how I would have gotten my baby out of the car. He could have died from smoke inhalation. I was so much in shock, I couldn’t even see the window.”

“It was all God’s timing,” Harris said. He was quick to shed the hero label, no matter how many times he’s heard it this week from friends and co-workers.

“Heroes are the ones who make it possible for us to do this interview here safely. The soldiers who go off to fight,” he said. “I just did what any other American would have done, especially somebody who has kids themselves.”