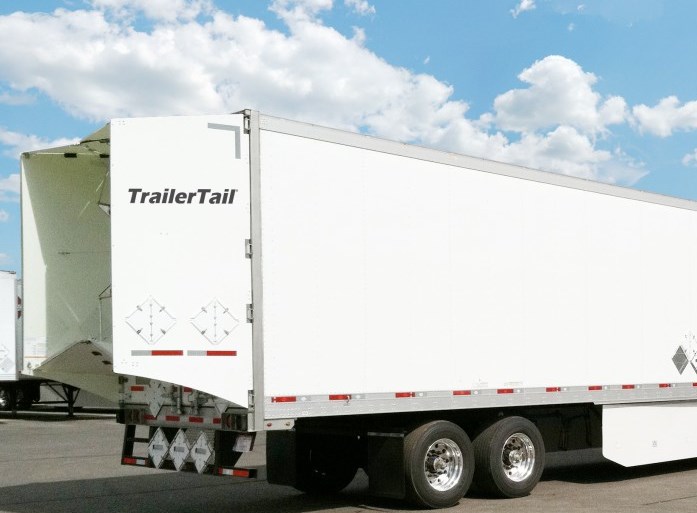 Trailer Tails now acceptable across most of Canada.

All Canadian provinces except for Newfoundland have agreed to allow full-sized trailer tails.

The policy change was agreed upon by Ministers of Transportation and Highway Safety when they convened Oct. 1. Ontario already allows full-sized trailer tails, thanks to a deferred enforcement policy that permits their use until the new Memorandum of Understanding takes effect.

New Brunswick, Nova Scotia and P.E.I. will issue permits for their use until the change goes into effect while the western provinces will wait until the MoU has been finalized. Newfoundland did not participate.

At a press conference at the American Trucking Associations Management Conference & Exhibition, ATDynamics founder and CEO Andrew Smith, welcomed the announcement, claiming Canadian fleets could save $3 billion worth of fuel over the next decade. Trailer tails improve the air flow aft of the trailer and have been proven to improve fuel economy by up to 9%.

“Trailers with tails, the original focus of our company, are now legal to circulate throughout North America, with a few tiny asterisks,” Smith said.

The Canadian Intergovernmental Conference Secretariat, announced “This amendment will harmonize regulations in Canada with those in the US and support the trucking industry in improving fuel efficiency and reducing emissions.”

ATDynamics produces 99% of the trailer tails currently on the road, which now number 30,000. Smith said the company projects to sell more than 200,000 units by 2017. Canadian fleets were eager to deploy the systems.
Smith announced Erb Group has placed an order for 350 trailer tails. Laidlaw also has been equipping its trailers with the devices. Smith said the tails have been cold weather-tested in Canada and will stand up to the harsh winters.

About 40% of ATDynamics trailer tails sold today are now of the auto-deploy variety, which allows the tails to extend automatically when the vehicle reaches 35 mph. A warning light mounted on the front corner of the trailer alerts drivers when they are backing up to a dock with the tails still extended.

If you’re skeptical of the fuel savings, ATDynamics now provides a datalogger so that fleets can do their own testing. All that’s required to perform the test is a single tractor and trailer.

Previous articleNew Ten-year transportation plan for B.C.
Next articleA Day at the Beach.