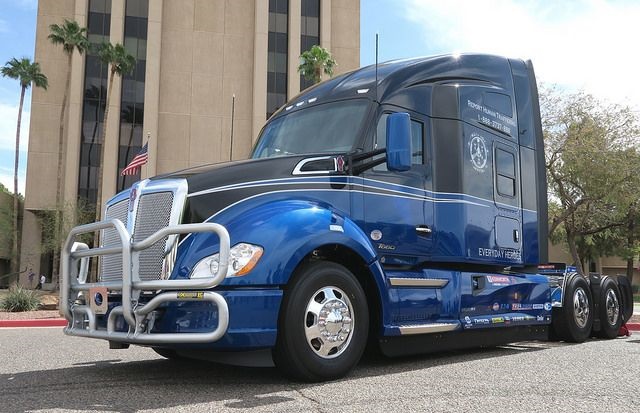 A special Kenworth truck that will be auctioned to raise money for Truckers Against Trafficking will make an appearance at the Mid-America Trucking Show from March 28-30 in Louisville, Ky.

It will be the second time an “Everyday Heroes” Kenworth T680 will be auctioned for the nonprofit group dedicated to stopping human trafficking by educating, mobilizing, and empowering the nation’s truck drivers and rest stop employees. In 2017, the auction netted $83,000 for Truckers Against Trafficking.

The trip to MATS will be part of this version of the Everyday Heroes truck’s five-month road tour before it is auctioned on May 17 in Phoenix.

The special Kenworth T680 will be displayed in the hallway outside the south wing of the Kentucky Expo Center. Members of the Trucking Against Trafficking staff will be at booth No. 30215 to provide information about the nonprofit organization, which has trained more than 680,000 truck drivers on the warning signs of human trafficking since it was founded in 2009.

“The Mid-America Trucking Show provides an excellent opportunity to generate awareness among owner-operators and truck operators about the important mission and dedicated efforts of Truckers Against Trafficking to end the crime of human trafficking,” Kenworth Marketing Director Kurt Swihart said in a news release.

The truck, which has a retail value of $162,000, is fully loaded with a 76-inch sleeper and features the Paccar Powertrain with a Paccar MX-13 485 horsepower engine, Paccar 12-speed automated transmission, and Paccar 40K tandem rear axles.